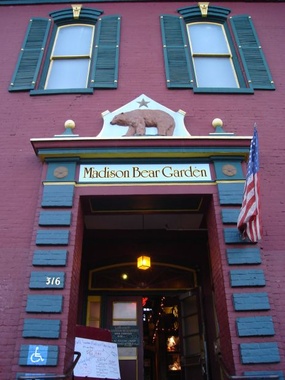 Madison Bear Garden, formerly the Lusk House, located at Second and Salem, is the iconic Chico restaurant that proudly boasts it has never charged a cover! Before putting random stuff on the walls was trendy, the Bear (as it is locally known) had more assorted junk hanging around than you can shake a stick at. This place is worth a visit for the sensory overload, if for no other reason.

The building was originally the home of John Bidwell's lawyer Franklin C. Lusk. Later, the building was, ironically, the headquarters for the Prohibitionist Party. The Native Daughters of the Golden West purchased the building in 1933.

Prices are reasonable for the food you get at this downtown eatery. Burgers and sandwiches are in the $7.00 range, and they have salads and other typical pub food (fries, wings, etc). If you are feeling adventurous, try the "Jiffy Burger" (as in Jiffy Peanut Butter). That's a guaranteed experience not to be forgotten. They have turkey and veggie burgers available for the non-beef or non-meat eating in the community. In addition to the full food menu, they have many beers on tap (not just the typical college town PBR) including a variety from our own local Sierra Nevada Brewery.

The Bear is also a nighttime destination for many. The line to get in on a busy night can be long, and some would say it can be an overrated experience.

2009-03-06 12:19:59   I've recently heard that this building was also the home of the camp fire girls and that the logo for that group is still on the building somewhere. Does anyone know anything more about this? —RyanMikulovsky