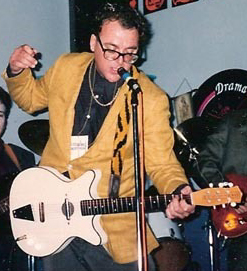 Matthew Champion Hogan (June 22,1953 - January 13, 2008) was a Chico musician, songwriter, club owner, concert promoter, newspaper columnist, and icon. He was often referred to as "Chico's oldest teenager," as he remained an active and vital part of Chico's music and social scene even as he entered middle age. Matt had a complex, larger-than-life personality that drew equally from his natural gregariousness and his unique sarcasm.

Musically, Matt is known as one of the pioneers of punk rock in Chico with The Agentz in the late 1970s; and as the keeper of the flame for American "roots" music styles with his band The Incredible Diamonds during the '80s and '90s when those styles were largely forgotten by mainstream music. He's revered both for his guitar playing and a hyper-confident, charismatic persona on and off stage. By the 1990's, his local renown was such that a university student would dress as Matt Hogan for Halloween and be successfully recognized throughout Chico.

Matt grew up in Hamilton City, CA, with two brothers, Tim and Michael, and one sister, Mary. It's likely he was inspired to a music career by his oldest brother, who was a band manager during the heyday of San Francisco psychedelia. Through his brother, Matt recalled briefly meeting important San Francisco guitarists such as Mike Bloomfield of the Butterfield Blues Band and John Cipollina of Quicksilver Messenger Service. Matt began learning the guitar at age 12, with the acoustic fingerpicking of Jefferson Airplane's Jorma Kaukonen as one of his early influences. (Many decades later, Matt could still play a note-perfect version of the Airplane's "Embryonic Journey" on request) After high school, Matt played around Northern California with a broad range of bands from funk to country, including a brief stint backing the eccentric singer/songwriter Skip Spence, formerly Jefferson Airplane's drummer.

In 1978, the 25-year-old Hogan helped bring the first punk rock to the Chico scene by forming The Agentz (see link for personnel). With songs like "I'm a Human Time Bomb" and "Hey Baby, What's Your Major?" the band leavened influences like The Sex Pistols and early Elvis Costello with Hogan humor and an uncharacteristically punk Hammond B3 organ. The band regularly sold out Chico venues like Nellie's, and was a frequent opening act at San Francisco's legendary punk venue, The Mabuhay Gardens (The "Fab Mab"). Many who followed the band assumed The Agentz would be signed to a major label but when that didn't occur, it was reportedly a source of disillusionment for Matt. In the future, his bands would focus solely on playing live and local, and he wouldn't actively seek recognition beyond his home turf.

In 1979, Matt formed a second band named "Diamondback" which by the mid-1980's became The Incredible Diamonds (see link for personnel). Borrowing the form of their name from the Fabulous Thunderbirds, The Incredible Diamonds was a rockabilly/roots band in the style of The Stray Cats, The Blasters, and The Paladins. The band opened for their mentors, The Blasters, at The Ping Pong Palace in the mid-80s, and was a staple on Chico's thriving bar and party scene (Playboy would declare CSU, Chico the top party school in the nation in 1987).

Initially the band played for college and alternative audiences, but when university crackdowns and new drunk-driving laws took their toll on Chico nightlife, Matt found his vintage rock also played well in rural roadhouses and honky tonks. Incredibly, Matt could play his music, unaltered, at a basement punk show one night, a yuppie wedding the next, and then on to a biker bar in a remote corner of Glenn county. He did this consistently for almost two decades. A sample of the band's calendar in 1998 shows them playing 70 shows over an 8-month period, traveling between San Francisco, Sacramento, Santa Rosa and Redding, and on one occasion, three Chico venues in a day.

Matt Hogan at the Flamingo Hotel, Santa Rosa. Photo by Melinda Mohnike Matt's guitar playing had both style and substance. He was well known to Chico club audiences for making use of his wireless transmitter, mounting the bar during guitar solos, or playing from the street outside the club. Antics aside, Matt was an vastly gifted guitarist. His style owed a debt to the guitar heroes of the 1950's—Scotty Moore, Paul Burlison, Cliff Gallup—but Matt's genre-busting, high-energy take on the past actually had more in common with '70s British pub rock than with the more reverent approach favored by retro revivalists. His style was rooted in rockabilly, but filtered through Jeff Beck, Johnny Thunders, and Angus Young. He liked volume, a little fuzz, lots of bent notes, two-string leads and long solos—rogue elements that could (and did) send rockabilly purists into convulsions.

Matt's personal style and demeanor were a big part of his legendary status as a performer. Onstage, he was a mix of dry wit and feigned nonchalance (he would often chew gum, appearing bored, during blazing guitar solos). He frequently brought his band down to a whisper while he told a story or dispensed folk wisdom. His catchphrases, such as "It's last call - you don't have to go home, but you've gotta get the hell outta here" were known and quoted throughout Chico. His fashion sense came from punk rock, but also drew heavily from Latino chulo culture. He wore thick-framed glasses in an era when it was uncommon for rock musicians, prompting frequent comparisons to Buddy Holly and Elvis Costello. In his later years, he was known for his vintage suits.

For most of his music career, Matt played either his blonde and well-worn 1950's Les Paul Special, or a pair of Danelectro models, the "U2" and the "Convertible." In the years before his death, he played primarily Fender or Squire telecasters, typically purchased "off the rack" with no modifications. He rarely used any effects pedals and played through a tube Fender Deluxe Reverb amp, identifiable by the name "Hogan" roughly sprayed on the grill cloth. He often used a modified car seat belt as a guitar strap. In early years he used a very long strap, requiring him to wrap his thumb around the neck to fret the lowest strings in barre chords. He occasionally used a full-sized Leslie effect speaker. In general, Matt considered the instruments secondary to the music and steered away from gear talk.

Matt's biggest musical influence was, most certainly, AM radio. He often recalled listening to the great San Francisco AM music stations as a kid, hearing the sounds of doo wop, early R&B, Motown, Philly soul, and Elvis. He would later record his own versions of songs from this era and distribute them to friends on a cassette titled "El Muerto presents 'Low & Slow.'" Two of his most prized music possessions in later life were Rhino's first doo wop box set, and Phil Spector's "Back To Mono" collection. Matt was 10 when the Beatles broke out on Ed Sullivan, and like many of his generation he was smitten. He noted how the Beatles borrowed from older American music styles, and he sought out the original versions of many songs the Beatles covered. A particular favorite was Arthur Alexander, an obscure African-American country singer who recorded the original versions of the the Beatles' "Anna (Go To Him)", "Soldier of Love" and "You Better Move On," all of which Matt performed throughout his life. 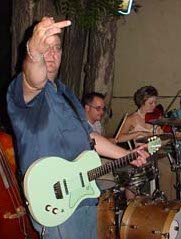 Matt Hogan, providing direction to a soundperson, Annie Awards rehearsal Matt valued spontaneity and a certain looseness in his music. During the Diamonds years, he would thwart others' attempts to slicken things up by either not showing up to rehearsals or by skipping rehearsed songs at performances. It's often said he knew the first verse and chorus to every song written before 1970—but ONLY the first verse and chorus. What he didn't know, he would improvise on the spot. Matt was part of a vanishing breed of musicians who could show up at a gig, meet the other players for the first time, and then, together, turn out four hours of credible rock, country, and blues standards off the cuff.

In addition to the Diamonds, Matt was a regular performer with other local bands including Brutilicus Maximus and Danny West's Lonesome Cowboys. He also appeared as a session guitarist on many local artists' recordings and toured briefly with neo-swing band Blue Plate Special. In 1999 he became a co-proprietor of Mr. Lucky's, a downtown nightclub. During this time Matt developed an interest in contemporary hip-hop, and while he fortunately didn't incorporate it into his own music, he was an expert club deejay as "MC Aitch" (a play on his initials). Matt was involved with local music theater, appearing annually with Shakespeare in the Park productions, and writing a rock musical version of "It's a Wonderful Life" for a Chico Cabaret production in the late '90s. He performed often at convalescent homes and hospitals and was a member of the Chico Arts Commission. He was frequently tapped as a bandleader or emcee for the local Annie Awards shows (and later, The Cammies).

For years, his column under the pen names "Bud Miller" and "Bailey Jameson" appeared in the local weekly The Synthesis. The column was much like Matt's storytelling in real life—about commonplace characters and places, but usually with the addition of some impossibly surrealistic element. As a lifelong Northern California resident and avid Enterprise-Record reader, he had a seemingly limitless supply of local folk tales and knew nearly every back road and out-of-the-way burg in Butte, Glenn, and Tehama counties.

Matt died in 2008 from complications resulting from a spider bite that went untreated. Two weeks before, he played a New Year's Eve show as The Incredible Diamonds with drummer Carey Wilson and bassist Dave "12-Pack" Sorensen. At the time of his death, he was in Enough Rope with indie rock singer/songwriter Barbara Manning, Loki Miller, and Charles Mohnike. Following his death, the band continued as a trio named Champion, after Matt's middle name. Former Incredible Diamonds Mark Pacheco, Phil Heithecker, Dave "12-Pack" Sorensen, and Dan Tomassini formed The Vibrolucks, playing many songs from Matt's repertoire.

A 2008 memorial show hosted in Matt's honor featured 15 bands comprised of former Diamonds, and drew hundreds of mourners from a broad range of social backgrounds. A second memorial show held in 2012 sold out the Chico club Duffy's (a frequent Hogan hangout), giving testament to the lasting power of Matt's local legacy. The event's promoter and former Incredible Diamond, Carey Wilson, plans to make it an annual event occurring on or around Matt's birthdate of June 22. 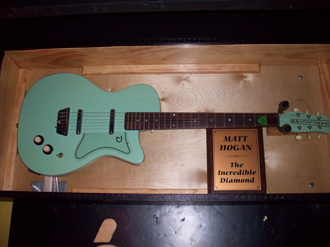 One of Matt's guitars, a Danelectro "U2", was dedicated by his sister Mary in a ceremony at Duffy's Tavern and now hangs there permanently. It was moved to a different wall in 2012 to accomodate modifications to the club's air conditioning system. He is greatly missed.