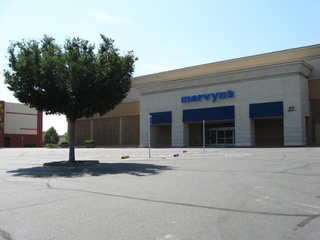 Mervyns from the north side; Cinemark 14 on the left.

Mervyns was a department store located in the North Valley Plaza in North Chico. The loss of Mervyns in December 2008 removed 162 jobs from Chico1.

Mervyns offered an assortment of goods from clothing and jewelry to housewares and gift wrapping supplies. The store was a part of a chain of department stores in the west and southwest United States with its headquarters in Hayward. They went bankrupt in 2008 and began liquidating fall and winter of 2008. Like most department stores, Mervyns did offer their own in-store credit cards.

Mervyns has been in the North Valley Plaza for decades, although not always in its current locations. When the Old Mall was still actually a mall, it was originally located on the East Avenue side, toward the center (approximately where Tinseltown is currently found). When JC Penney moved over to the New Mall in the 1990s, Mervyns moved over to their spot on the western edge of the mall. They (along with Tinseltown, which moved in shortly before the NVP went from mall status to simply shopping center) were one of the few remaining original pieces of the Old Mall. In fact, the glass doors that exit out into the parking lot between the now departed Mervyns and the movie theater were once the mall doors that opened up into the central mall walkway. The parking lot now stands where there was once walkways and stores.

Sorry, there won't be any Wiis to be had here, but if you're looking for Wii accessories, they've got you covered.

1. According to data from the San Francisco Chronicle and the State of California Employment Development Department