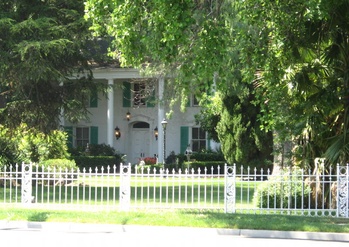 Miller Mansion is the large private residence on the Esplanade on the north side of the Lindo Channel. The site was originally the home of Daniel Bidwell, John Bidwell's half-brother on his ranch known as Five Oaks. The original house on the site burned down, and the property was bought by Roy Miller of the family behind Miller's Market.

Although rumors persist that "The original Victorian home was damaged beyond repair by the fire, and was torn down",  that didn't happen. "There was a fire on the front porch and a small fire on the interior," Caroll said. "But it never burned down as has been reported." as reported by https://www.actionnewsnow.com/content/news/EXCLUSIVE-An-inside-look-at-the-Miller-Mansion-508583531.html

When acquired by the Caroll family, "It was very well-done, but it wasn't restorable," Caroll said. "It had mostly termite infestation, and a lot of the walls were not drywall, and were solid-about 4-inches thick. Mrs. Miller didn't want to let it go. She wanted it restored. They assessed the entire building, and determined it was not restorable.".

The Bidwell mansion was replaced in the 1950s with the house that we all know today. Miller Mansion was built in the Greek Revival style.

The property was eventually sold to a relative of the Miller Family, who intended to convert it into a bed and breakfast. The Miller Mansion was used as a B&B for a while, with four guest rooms. Eventually the owner decided to get out of the business and sold the property to James Cotter in 2004 for $1,010,000, who also owns the nearby Garden Villa shopping center. Both the gates to the mansion and the shopping center have a logo that combines the letters C and R, which stands for "Cotter Ranch." The mansion serves as Cotter's private home.

Visible at each gate is a family crest with the Latin motto Ora et Labora (Prayer and Work).

The movie George B (1996) staring David Morse and Nina Siemaszko was filmed on the premises.1. 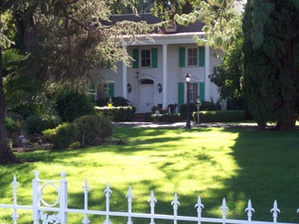 2010-03-06 16:01:07   This is so sudden! ... Just kidding. This website has no affiliation with the Miller Mansion. It's an encyclopedia entry. The house is a private residence, perhaps you should go to the gate and try to page them.—GB —GregBard