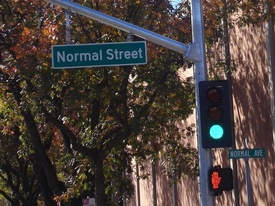 When Normal Avenue was "Normal Street" 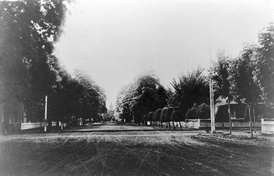 Normal Avenue (formerly Sycamore Street) was named to commemorate Chico Normal School, which is now Chico State. This is one of the few avenues south of W. 1st Street.

Normal Avenue is often mistakenly referred to as "Normal Street" by long-time residents and newcomers alike because of the downtown drinking establishment known as Normal Street Bar. The City of Chico in late 2007 installed a new stoplight at the corner of Normal Avenue and 2nd Street, and put up a sign at the intersection that read "Normal Street." The city immediately recognized the error. Alongside the incorrect name, a smaller street sign on the same corner still correctly identified the name of the street. The problem was fixed early 2008.