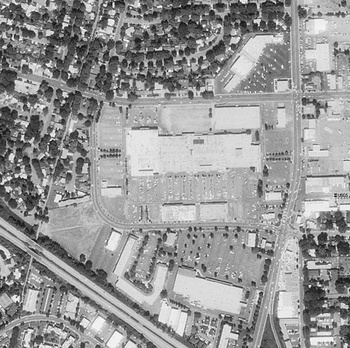 North Valley Plaza in 1998. The theater is not yet built in this photo. Also note the apartments in the lower-left hand corner are not yet built. Courtesy of Terraserver and USGS.

The North Valley Plaza was Chico's first indoor mall. It opened in October 1968 as a direct result of the convenient freeway access provided by the then recently completed Highway 99.2 Today, the NVP walks a fine line between belonging in the category of Shopping Centers and Departed Businesses. It was once a vibrant mall, the center of shopping activities in Chico. It was home to JC Penney, Montgomery Wards and Mervyns, as well as many smaller shops such as a craft store and a toy store. It even had a small two-story parking structure to accommodate all of the visitors. When the Chico Mall was built in 1988, the "Old Mall" (as the NVP is still lovingly and nostalgically called by long-time residents) found its days numbered. After losing JCP to the "New Mall" in the 1990s, things were looking grim. Bringing in Cinemark 14 looked like its last hope, but even that couldn't save the mall when Wards went out of business. By late 2001, much of the original mall structure was demolished. The reinvention of the NVP in the early 2000s made it more of a shopping center or strip mall.

It is currently a thriving shopping center in North Chico, home to CVS Pharmacy, Dollar Tree and Trader Joe's. Mervyns closed in late 2008 and Longs Drugs became CVS Pharmacy in 2009. Its final location was not its original location. There is a set of buildings just past where Wards used to be located, where one will find Starbucks, Ben & Jerry's, The Pour House and other businesses.

Interestingly, the former Mervyn's building still has a window that looks out into what would have been the central walkway of the mall, and the parking area located between the movie theater and the stores was once also inside the mall (as the theater previously had an entrance straight into the mall building and the store facades are located where the original mall facade was). It can be a trip down memory lane for anyone who has been in Chico for a long time.

For a good comparison of how the North Valley Plaza looked as a full mall versus today's strip mall, click the "Map" button at the top to see a Google Map of the area. Click the "Satellite" button to see the satellite photo from above. Note the differences in layout: in 1998, NVP was still one enclosed mall, whereas now it is several buildings with facades that face outward. Also, Montgomery Wards was still standing in 1998, and it is an empty lot in the recent photo. The parking structure was still there, as was the Wards Auto Center and Video Headquarters (which was once JCP's auto center long ago), but the movie theater was not yet present

2009-01-28 17:54:18   Wow that's sad. :( We lived in Chico and places nearby to drive and saw the changes before we moved to Oregon in 1996. Sounds like it's gotten even worse and they tore down the parking structure which was the DUMBEST decsion they could do cause now everyone has to park out in the rain/cold. :( :( You know what they put in place of the garag? MORE STRIP MALL!!!! :> Grrrrrrrr. (Wacks construction director on the head with cane like Biff in BTTF 2) Hello. helllllllllllo! Anybody home? —71.111.121.211

2011-09-15 23:27:48   That was totally dumb to knock down that garage only to put up stores that won't last long. They should've thought ahead of the economy and left the garage so people can have a place to park in the rain when the jet stream aims the hose at Chico.

Chico can be a VERY wet and windy place in the winter (sometimes damaging) it's just the last decade has been almost bone dry due to certain ocean conditions that I won't get into here but it would be very smart of them to rebuild the mall so people can have a place down there to get dry and hang out. :p

2012-01-27 19:00:12   Test. It sucks malls are becoming abandoned and instead of being put to good use they get turned into ugly strip malls which just add up the smog. :p I had a phoebia of dark places and since I've never seen a garage before I was always scared to park under the garage so I'd always have my parents park on the roof (which most of the time they did).

I enjoyed the architecture of the mall and I loved the flooring compared to the Chico Mall which is all *blah*.

2012-05-03 16:21:45   Roos/Atkins, a chain of upscale men's clothing stores based in San Francisco, California was at the mall too. It was formed through a 1957 merger of the Robert Atkins and Roos Brothers clothiers. The chain expanded after World War II to include several locations throughout Northern California, but declined in the 1980s; by the early 1990s all locations had been closed or sold to other retailers. —63.150.133.176

76.14.203.133 is correct - there was a hobby/toy store and bookstore nears Wards and an upscale women's clothing store across the way. The NVPM was the place to hang out in the day:)