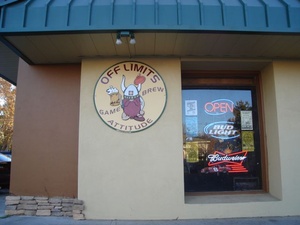 The now departed Off Limits bar

Off Limits was a bar and music venue in Chico. Until 2005, it was owned by local business woman Barbie Boeger and operated under the name The Wild Hare. Ownership and name changed in late 2007, when Off Limits became Nick's Night Club. It was and remains (with its current name and ownership) a popular place to catch a show and have a drink.