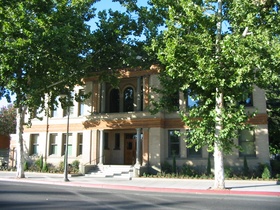 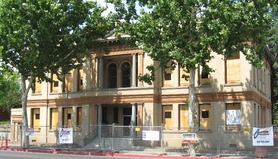 Old Municipal Building undergoing retrofit and repurposing The building underwent restoration in 2008 and was finished May, 2009 at a cost of $3.1 million. It boasts a completely refurbished stair case, and its original 1910 "Regulator Clock" has been restored. Furthermore, the building still has a jail and vaults from when it originally housed main operations of the Chico Police Department. Finally, the restoration included energy efficiency enhancements which resulted in monetary awards from PG&E.2.

The first floor of the building offers the following services:

It is open to questions from the public and is used by the police for day to day office duties. Volunteers man the service desk. The station further enhances police presence in the downtown area.

This department will be moving into the old town hall this summer.

The second floor of the building offers the following services: