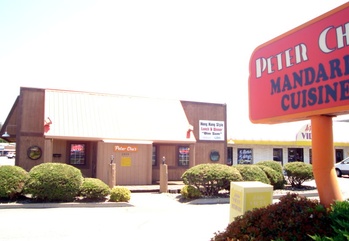 The front of the Peter Chu's building, as seen from Cohasset Road. Note the circular windows that look like a ship's portholes, as the location was once a seafood restaurant. 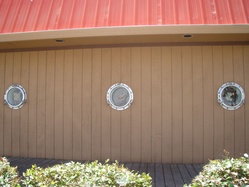 Porthole style windows on the side of Peter Chu's, a hint at the building's former life as a seafood restaurant Peter Chu's is a Chinese restaurant in North Chico that features Mandarin, Szechwan, and Hunan styles of cooking as well as dim sum. They offer lunch specials, bento boxes, family dinners and individual entrees. Lunches are about $6-8, and include soup, appetizers (wontons and an eggroll) steamed rice and an entree. Rice is served separately in a warmer. The individual dishes range in price between $8-10 and include all types of meat — with an expansive seafood menu — and vegetable options. Dim sum options range from about $3-5 per dish. They have a wine menu.

The location was previously occupied by a seafood restaurant, and it is apparent when looking at the building. There are circular windows that look like a ship's portholes, some of which still have sea themed items in them. The wood frame of the building was once adorned with ropes to add to the maritime theme, although this is no longer the case.

2009-03-24 12:22:44   Wonder if their Dim Sum is made in house or are prepackaged. Sounds interesting with all those styles of Chinese cooking. —RyanMikulovsky

2009-05-16 14:44:58   It's been driving me nuts: what was the name of the seafood restaurant that used to be here??? My mom said maybe "Skipper's" but for some reason that doesn't sound right to me. Can anyone confirm/deny the Skipper's thing, and if it wasn't, tell me what the name of it was? —StaceyEllis

2009-05-17 22:12:54   I went there the other day and had a Szechuan of theirs. It was good. I was surprised that they had linen on the tables like a fine dining establishment. They certainly try to make it a nice place to dine. The server was very attentive though I felt bad because she got crushed by two large parties at the same time.. with no help! Anyway, they actually ask how spicy you want your food, which is great. However their hot is medium to me ;-) I recommend the place though be aware only off the experience of one plate. —RyanMikulovsky