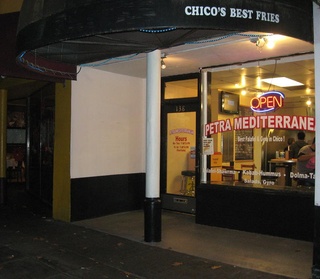 Petra Mediterranean Cuisine was a downtown restaurant that specialized in Mediterranean cuisine with gyros, falafel, shwarma, kebabs, dolmas, and various salads (such as tabouli).

Petra was located where Pommes Frites used to be. The interior has been redone although floorspace for dining is at a premium with just four tables. Next door is Arabian Nights, a hookah bar, and is owned by the same people.

Petra has since closed and is now another Mediterranean/Middle Eastern restaurant called Ali Baba.

2009-01-03 14:54:32   I very much liked their falafel sandwich. The falafel were extremely moist but nicely fried and was rich on flavor. There was only a thin amount of sauce on it (tzatziki probably) and a minor amounts of vegetables. Which, to me, is good. Because the reason behind a falafel sandwich is... the falafel! The pita was pressed closed so it did not fall apart on me (Sultan's Bistro needs to consider this method of serving). Their hot sauce was very good with the falafel. I also ordered the fries but I didn't really care for them. I don't like thick cut fries as they're always very dry. Anyway, I've only had falafel at two other places in Chico and this is by far the best yet. —RyanMikulovsky

2009-10-14 23:15:29   Being the only ones in the restaurant, the service was good. The food was slow to cook. There were large portions and the food looked authentic and just made. Prices were a little high for an appetizer sampler and one entress. Left feeling full and satisfied with my choice. —76.231.250.144