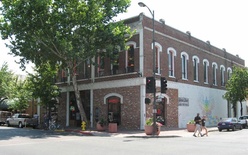 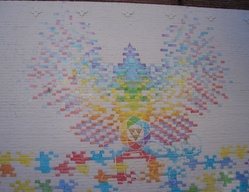 The Phoenix Building is a building downtown at Third and Broadway. It was built by Jerry Noonan in 1889 using bricks from Jefferson Walker's brickyard. It was gutted by a fire in 1975, and was since resurrected —hence the name "Phoenix." It is a shopping destination located on the corner of Broadway and 3rd Street in downtown. It houses many shops and restaurants. Four locally owned eateries call this building home: Sultan's Bistro, Jon & Bons Yogurt Shoppe, the Hideaway Cafe and Broadway Heights (located upstairs). Additionally, there is a gift shop, a realtor's office, and a salon. There is a mural of a phoenix painted on the bricks of the 3rd Street side of the building. 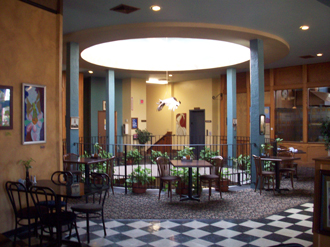 2012-03-14 23:39:17   I remember that floor! There was a vegetarian pizza place up there at the time I used to live there in the 90s that was the boring pizza. (at least boring to me!) I am not sure if that pizza place is still there or not. Also on the first floor was a shop with teddy bears and as you go up the stairs you could peak down into the store thru the top part of a window. At least I did back when I was little.