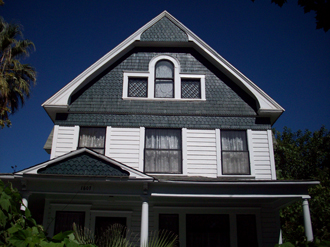 The Post Home, also called the Bruce Home, is a house on Park Avenue which may be eligible for listing in the Chico Historic Resources Inventory. It was built in 1906. The house was pre-built of redwood in Eureka, Carson Mills and shipped here William Bruces Father (Bruss) owned entire 1600 block from 1860 on.ran grocery/hardware store next to house corner 17th &Park.The first miners highway wound down from the gold fields and ended at Bruce's tent store and intersected w/ Bidwell's freight road.Calif feed and seed of Sacramento city had a seed storage bldg on the back corner of the lot in 1860 (16th st. and alley)and the brick foundation stones still exist 2 ft. underground.This is the only bldg. showing on the 1860 map from this area to Bidwells adobe. Bruce (Bruss) family owned Chico meadows also(Butte meadows boy scout camp).The house has been the site of at least 5 death,murder,suicides and the front parlor was the meeting place for the posse that went forth to slaughter the mill/deer creek Indians.Will Bruce had married effie muriel Thomasson of the Richardson family and at the time the Lewis children were abducted by the mill creeks from Clear Creek Indians and when thankful Carson Lewis escaped she found her way to the Thomasson home on hog creek(on the Humboldt Rd. The Bruce home hosted Annie Bidwell as well as others and has a 3rd floor dancehall as well as a dry basement and one of the first concrete foundations.Is all original w/ all windows,doors,fixtures (all floors exposed straight grain fir W/no floor coverings.)Painstakingly restored over 7 years the house is 14 rooms and has the feeling that those who lived there are still there.The barn,bunkhouse and greenhouse are restored also. Effie Bruce was founder of chico garden club and many of the plantings are original to the house.This is only a paragraph of a family,my family who came here to a small town called Enterprise (now under lake Oroville)in 1849.There is a private family book of 400+ pages on the Bruce family.The filling station next door is one of the best time capsules in Chico as behind Bruces tent and store and until 1937 a 20 ft. deep pit existed where everything was discarded and dumped.It has been paved and sealed since then. The house as well as the block seems to be plagued by sorrow as there have been at least 6 murders,deaths and suicides since the house was built,not to mention a handfull of unrelated deaths over the years within the block.Ghosts?Who knows. this is the legacy of one family from the beginning of chico for good and for bad.The house has endured and outlived its occupants,the ravages of time and weather intact and undisturbed.