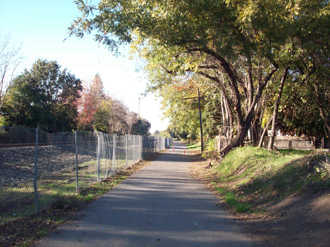 The Railroad Bike Path is a bike path that extends parallel with the railroad tracks. The path begins at the end of Cherry street where it crosses Big Chico Creek. It goes west along Big Chico Creek for a short distance and then jogs around to the North-West, following the railroad. The bike path goes on past West Sacramento, where it is accessible, and ends at West Lindo Avenue. It provides students convenient access to the campus from Highway 32 near Stewart Avenue. The path is a great way to avoid the smog belching traffic of Highway 32 and to connect residents from the South Campus Neighborhood to the commercial areas on Nord Avenue (such as Safeway and Aca Taco).

2009-07-21 01:50:21   @Ryan: That's a good point. From the picture and description on Chico State Bike Path, it looks like it is the west-to-east section that connects Nord Ave. to the campus. Maybe the 'Chico State Bike Path' was constructed prior to the rest of the bike path that runs along the tracks or vis-versa... —Pietro