Ray Walter Head Memorial by Wachovia Bank in Downtown Chico. At this location, Ray died in the line of duty while trying to save The Silver Room. 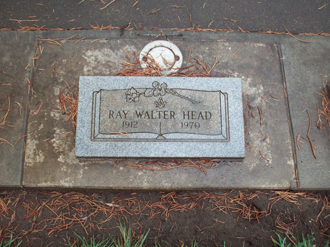 Ray Walter Head (1912-1970) was a fire marshal for the City of Chico Fire Department who died in the line of duty while "protecting the lives of his men." On February 14, 1970, while responding to a fire at the bar known as The Silver Room on Third and Broadway, Ray perished.1 He served the community for over 40 years. He is buried in the Chico Cemetery. There is a monument to his memory on Broadway downtown.