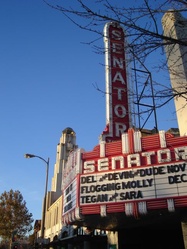 Senator Theater, with the restored tower in the background (Photo by KCEllis) 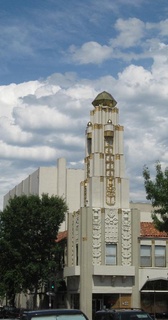 The Senator Theater is a local music venue with live shows from various local and out of town bands. They get some big name acts, and therefore the ticket prices can be a bit steep compared to some other local venues.

The Senator has an interesting history prior to its current use. It was built in 1927, and was originally used for vaudeville theater. In fact, when it was renovated in the early 2000s, previously unknown dressing rooms were found, revealing much about the past uses. As movies became a more popular, it found a new use as a movie house. It was converted into a four-screen theater in the 1970s, and it remained as such until it closed in 2000. It was bought by a local business person, who renovated it and opened it back up for live musical acts. The divider that made it into separate movie theaters was removed, allowing a venue for nearly 1000 standing patrons.

The art-deco theater has a beautiful mural inside, which is nearly as distinctive as the tower on the corner of the building. The Senator Tower had been an icon of downtown Chico for generations, but was temporarily removed in the late 1990s because it was leaning to the side over 5th Street. For the sake of safety, it was taken down and put away until restoration could occur. After a few years (by the time most Chicoans had given up on ever seeing it ever again) a new, more stable tower was built with the same signature diamond on top.

2012-05-29 11:24:38   According to Chico Heritage Association research, the Senator Theatre opened in April of 1928, was built by theater owners as both a movie house and live performance venue. The leaning tower was removed in 1999. The lighted "diamond" on the very top of the tower was replaced, with golden colored glass, not with the multicolored glass panels of the original. Chico Heritage Association (CHA) held a fund-raising event in 1999, "Robin To The Rescue", in which the 1938 Robin Hood movie, partly filmed in Bidwell Park, was screened in the theater. Together with other donations from the community, CHA raised $10,000 to give to whomever restored the tower. Eric Hart, who bought the building then, did just that, and so now THE TOWER IS BACK! -John Gallardo, CHA —67.126.199.193