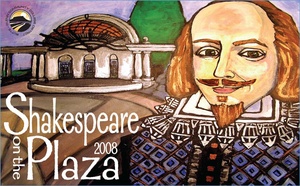 Artwork by Jerry Miller. Used with Permission of Ensemble Theatre of Chico.

The Ensemble Theatre of Chico is a licensed 501(C3) Charitable organization.

History: The Ensemble Theatre of Chico promotes theatre arts through the production of Shakespeare on the Plaza and other events by offering educational programs. Our primary goal is to provide the people of our community with the opportunity to attend, participate in, enjoy and be enriched by the theatre experience.

The Ensemble Theatre of Chico was formed in April, 1997, as a non-profit 501(c)(3) corporation to keep the local tradition of Shakespeare in the Park alive. Nineteen years ago, as Shakespeare in the Park, Romeo and Juliet was performed at the campfire circle near One Mile in Bidwell Park. Since that time, this summertime event has been a highlight on Chico's cultural calendar.

From 1989 to 2006, productions were staged in our own Globe Theatre in Cedar Grove at Bidwell Park. That venue has an interesting history of its own. John Bidwell, the city’s founder, donated Bidwell Park to the city of Chico. To this day, it remains the second largest city park in the United States (second only to New York's Central Park). It is best known as the setting for the classic 1938 film, The Adventures of Robin Hood, starring Errol Flynn. Cedar Grove is located within the park next to the Chico Creek Nature Center and is used for picnics, wedding receptions and other gatherings. It is now best know as the home of Shakespeare in the Park.

In early 1997, the non-profit corporation that oversaw Shakespeare in the Park and the for-profit production company that produced it decided that they would, respectively, go out of business and focus on other events. On short notice, four local theatre lovers jumped in to undertake the enormous task of mounting a summer production with little more than their good intentions and hard work on their side. But the show went on, quite successfully. As the attendance approached 2500, several local commentators noticed the increased quality of the production. We were able to operate in the black, expand our asset base and begin the process of building a stable repertory theatre with a regional reputation.

In 2007, in conjunction with the City of Chico, we became Shakespeare on the Plaza, and our productions were moved to the newly remodeled City Plaza between fourth and fifth Streets. By switching to a donation-only admission model and bringing the productions to the heart of downtown Chico, we have been able to introduce the fun and beauty of live theatre to a broader audience.