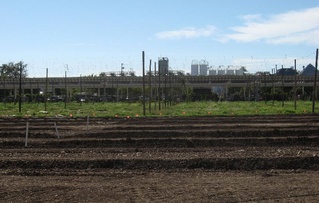 Sierra Nevada Brewery could possibly be the business that put Chico on the map. With classics such as their famous Pale Ale and seasonal beers, their products are now known and sold nationwide. The brewery even has its own hop yard, which are used for their Chico Estate Harvest Ale. It has been privately and locally owned since it was first founded by Ken Grossman in 1979 and has become a huge source of local income. The brewery has a gift shop and offers tours to the public.

Seasonal Ale: 12th Release Harvest Wet Hop Ale The brewery prides itself on use of high quality two-row barley and whole hops. Their beer never uses adjuncts such as rice or corn which only serve to make a cheaper, lighter (less filling) beer. Most of their brews, such as their popular Pale Ale, are finished in-bottle. This means that the beer gets most of its carbonation (CO2) from a small amount of yeast added upon bottling, which is the "sediment" you see after the beer settles in your glass. Pouring after a light swirl of a nearly empty bottle makes the beer pleasantly cloudy and, depending on your taste buds, may add to its flavor complexity.

Sierra Nevada Brewery is a sprawling complex where all their beer is brewed, bottled, and shipped. People new to Chico will immediately notice rows of 800 barrel environmentally controlled fermentation tanks towering into the sky while driving on East 20th Street. The scent of production fills the air on most days (which part of the process is this? Boiling?). Sierra Nevada's polished copper kettles where the wort is boiled and hops are added were all imported from Germany — a few were bought from a brewery that had gone out of business (were the tuns also brought from out of country? Or is it the other way around?).

Their hop yard, as the sign states, is an experiment that may help bring back the by-gone days of quality California hops. In 2008 the company appeared to be greatly expanding their hop growing operations.

The brewery offers self-guided and guided tours. Self-guided tours has you coursing through the main building and reading interpretation signs. There are also a set of videos that can be watched on-demand within The Big Room. The guided tour schedule is available on their website and is far more thorough. In addition to the brewery and gift shop, they offer lunch and dinner at their Sierra Nevada Taproom & Restaurant. The Big Room is a popular venue with live music and other events such as New Years Eve.

Ken Grossman was a student at Butte College and Chico State.

These seasonal brews can often be found at stores and drinking establishments.

Generally, the following beer cannot be found in stores. 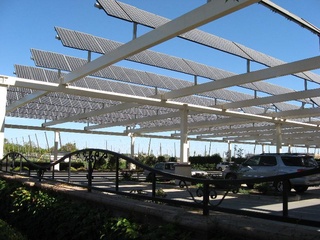 Sierra Nevada's solar energy structure installed in 2007 The company has been one of the city's leaders in sustainable practices by building a large solar array over the parking lot adjacent to the Sierra Nevada Taproom & Restaurant. But they've been utilizing Fuel Cells for power long before then and have had an extensive recycling program. Their brewing processes also attempt to recycle valuable resources, including heat from kettle steam, and carbon dioxide (CO2) from fermentation. Finally, if the State of California issues an energy alert, Sierra Nevada will voluntarily reduce its energy consumption to help prevent brownouts.

In 2009 the brewery began implementing a way to irrigate their hop yard by recycling water used in the brewing process. The hope is to continue on their trend of sustainability and significantly reduce their water bill from the California Water Service. 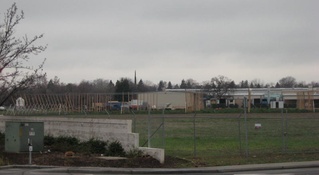 Southern extremity of the new hop yard at Sierra Nevada, adjacent to Costco. It was developed in 2008.