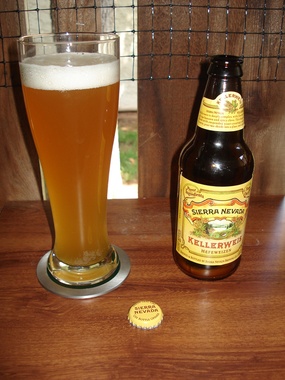 Kellerweis Hefeweizen, crafted and bottled by the Sierra Nevada Brewery, was announced March 6th 2009 and began slowly trickling out unto the world. By mid-May stacks of the beer could be seen on prominent display in area stores. It replaced the year-round Wheat Beer and is 4.8% ABV.

Kellerweis is discribed by the brewery as "a light and refreshing beer with deep complexity of flavor. The yeast provides hints of fruit flavors and spices, including ripe banana and clove. This hazy-golden beer glows with suspended yeast creating a velvety texture perfect for a sunny California day."

2009-05-20 07:22:07   I had this out of the bottle the other day at The Banshee. It had notes of citrus and vanilla. Pretty tasty although I don't understand why Hefeweizen is the United States' latest beer fad. —RyanMikulovsky

2009-06-07 15:51:25   I have to say, I've never really enjoyed the flavor of Hefeweizen. I first had it while living in Germany, and it just didn't suit my tastes at all. This beer is no exception, but I can say of the many American Hefeweizens I have tried, this one is pretty authentic (so maybe that's why I don't like it?) to the German style. I'm glad to see SN offering it, though, because several companies make a mediocre version of Hefeweizen and SN is at least doing it well. I wish I liked it more, but at least they have so many other varieties that I enjoy. Although some of them are awfully hard to find outside Chico sometimes... —StaceyEllis

2009-11-07 16:31:35   I never did say if I like this beer or not. I like it a lot. It is remarkably similar to those in Germany's state of Saxony. But I don't have the right glass to serve it in so I don't buy it. Lame excuse, I know. But the good news is, the SaveMart in Davis now stocks it. So I may well get a proper glass. —RyanMikulovsky