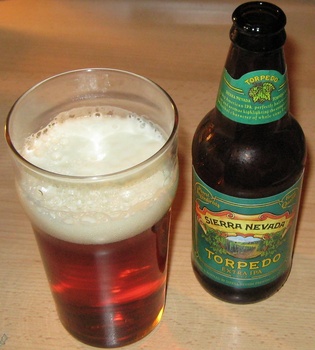 2009-04-12 20:03:48   I'm an amateur but here goes! This beer when first poured has an aroma that can only be characterized as peaches. It develops a nice white head but it doesn't stay long. It has a deliciously amber coloration and is crystal clear. First taste was very crisp with flavors indescribable by my palate. I however can say what I did not taste. I did not taste citrus nor pine as the bottle suggests. And certainly not bananas. Furthermore, the Torpedo did not bruise the senses of malt! Despite it being an IPA at 7.2% ABV, alcohol was not the first thing I tasted; that waited until the finish. And that finish happened to be quite smooth and long lasting. I like this beer quite a bit since it doesn't really remind me of the many harsh IPAs I have had over the years! —RyanMikulovsky