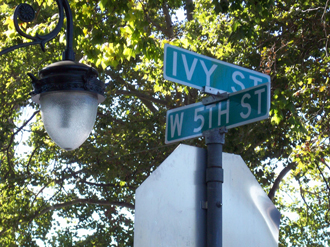 The South Campus Neighborhood is the neighborhood bounded by West Second Street, Salem Street, West Ninth Street and the western city limits (which is called the Greenline). Historically, this area was the first residential area established in the city. The area was surveyed for laying out streets in 1860. South Campus is home of the Stansbury House, Craig Hall, Depot Park, and the Language Houses.

Currently, it is the most densely populated area of the city. The South Campus Neighborhood Association represents the interests of the neighborhood to the community. South Campus is a dynamic residential neighborhood consisting overwhelmingly of young renters under thirty-five, and specifically Chico State students including individuals known as bros. The intersection of Fifth and Ivy Streets is a neighborhood commercial zone referred to locally as Five and I.

In 1991, through efforts of the Chico Heritage Association, part of the neighborhood extending from Salem to Cherry, and from Second to Sixth was named to the U.S. National Register of Historic Places as the South Campus Historic District. This district consists of several properties which have been named in the register as contributing to the historical district.

There are many fraternity and sorority houses in the area, and the city has designated a Fraternity/Sorority Overlay Zone which is largely contiguous with the neighborhood.

Buildings listed as contributing to the Historic District