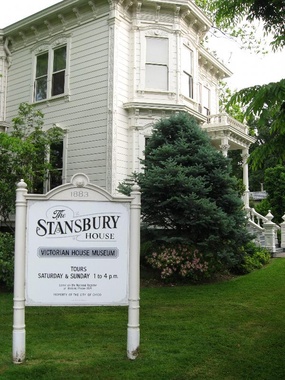 The Stansbury Home is a Victorian house that has been a part of Chico since 1883. It was the residence of a medical doctor by the name of Oscar Stansbury and his wife, Libbie. It was listed on the National Register of Historic Places in 1974 and an individual property, and in 1991 was listed as supporting the South Campus Historic District. It is now the property of The City of Chico. However, the Stansbury Preservation Society helps to fund and maintain the 19th century historic house as a museum for all to see. Tours cost $4 for adults, $2 for children. Every year, the house hosts an a Wine, Dine and Jazz Party (May), Ice Cream Social (July), and Victorian Christmas (Dec.).

In late 2007 to early 2008, the Stansbury House closed and underwent major improvements including the construction of a reconstruction of the former carriage house. This addition now houses a collection of period medical supplies including an x-ray machine and tools used by Dr. Stansbury. It also houses a carriage similar to the one used by Dr. Stansbury when he would go on house calls. The original carriage was lost when the original carriage house burned down.

2009-07-15 15:24:08   The newly constructed structure on the property is the Carriage Barn, which replaces a building which had burned in 1933, and is used by the Stansbury Association for storage, office space,display area, and meeting area. The full name of the group operating the museum for the City of Chico is the Stansbury Home Preservation Association. The Victorian Christmas is held every year early in December. —75.15.95.14