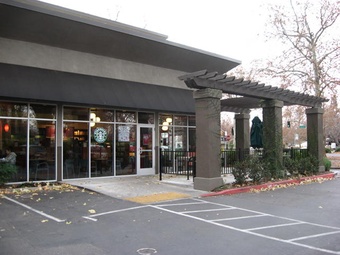 Starbucks on the Esplanade (has a drive through!). Note that this location used to be a French bakery and before that, Popeyes.

What can one say about Starbucks? If you've seen one, you've seen them all. And yet, Chico is teeming with them! There are no fewer than six full-size Starbucks stores in town, and two licensed stores are located at two Safeways. If coffee is your thing, they seem to have your answer. If you compost, some shops in Chico offer free grounds such as the one near North Valley Plaza (the old mall) and the Esplanade location. There you may find grounds near the bathrooms.

Barnes & Noble has its own cafe that serves Starbucks drinks, but it is not an officially licensed Starbucks as their food comes from The Cheesecake Factory. Drinks are mostly the same except for the hot chocolate which is made with half and half and Godiva powder instead of a syrup.

A contributor at the San Francisco Wiki noted that Starbucks announced a program on April 8, 2008:

Starbucks announced a program on April 8, 2008 that if you get a Starbucks Card and register it online, that when you use that card at their full sized-stores(not licensed stores, not Safeway), you will get points towards earning free refills on brewed coffee, free milk options(i.e. soy milk), free syrup modifications(i.e. different flavors of syrup), and a free tall beverage with any whole bean purchase. Please see their website to register your Starbucks Card. http://www.starbucks.com

Also, at random, Starbucks may send you an email and notify you that they have added an extra $5.00 on to your card for being a loyal member. The free $5.00 reward is chosen by computer and is completely random.

Speaking of the Internet, yes, Starbucks now has free unlimited WiFi as of July 1, 2010. No purchase or Starbucks card is required.

If you're not so into the corporate coffee thing, Chico does offer an array of locally owned cafes to choose from as well.

In downtown, the Starbucks is located across from the Phoenix Building, next to Pita Pit. It's a fairly spacious store, but there is no drive through.

For a drive through, you can go to the Starbucks at 9th and Esplanade. Please note that the drive through can actually take longer than going into the store if the people in front of you order a ton of stuff. Also, it really wastes a lot of gas idling in line and gas is so expensive these days (and if it isn't now, it will be!).

Licensed Starbucks are at the Safeways on Mangrove and East Avenue. The employees are employed by the supermarket and not Starbucks. They just happen to sell licensed Starbucks merchandise and coffee. You do not need to tip Safeway baristas as Safeway company policy does not allow tipping of employees. If you leave tips, the employees are required to put them in the cash register as the property of Safeway.

Licensed Starbucks in Safeway do not have WiFi and they do not accept Starbucks cards nor do they offer free refills or any other card benefits. They accept do Safeway gift cards.

Starbucks has announced that they will close two Full-sized stores in Chico in 2009. The stores located on Nord Avenue and East Avenue/Mariposa(by the large Safeway across from P.V. High) will close. The Safeway licensed Starbucks kiosks will not be affected by these closures.