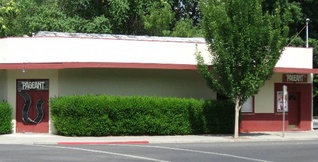 The Pageant Theatre is Chico's only independent film house, and is often the only contact many Chicoans have with controversial and small release films. The theater has been locally owned and operated since the 70s, and strives to provide an eclectic selection of shows that the larger Cinemark Theater doesn't bring to town. The films shown at the Pageant are notoriously not the Hollywood blockbusters one finds at a multiplex, but rather independent or foreign films. They're located next to Cafe Flo and are a comfortable walk to Shubert's.

2008-02-11 16:14:47   My 3rd grade teacher was one of the coowners at the time. I remember taking a field trip to the Pagent to watch an animated movie (forget which one now), followed by the music video of Michael Jackson's Thriller. I got to run the projectors (yep, the nerd). —RexKerr