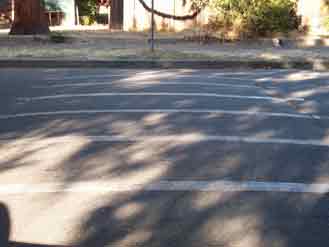 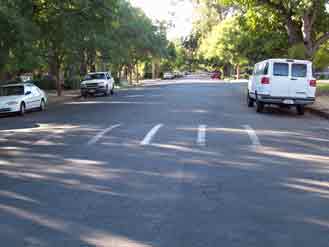 Traffic undulations (also called speed humps) are roadway design features intended to slow traffic. An undulation is a 3-inch rise spread out over about 12 feet. This gradual rise reduces the jolt caused by a typical speed bump.

Traffic undulations are considered a desirable method of traffic calming because they are self-enforcing. The Police Department expends less effort to gain voluntary compliance with the speed limit. In theory, fewer speeding tickets are issued and the overall speed of traffic is reduced near the undulations.

However, there are some drawbacks as well. Studies have shown a slight increase in noise levels near undulations. Furthermore, they are not 100% effective. Some drivers continue to speed in spite of the undulations.

Usually, undulations are used on residential local or collector streets with a speeding problem only after conventional methods of reducing speed have failed. These methods include police enforcement, use of a speed trailer, and other traffic control devices such as signing and striping.

Undulations are usually only installed on streets which are: residential local or collector streets; not bus routes; improved with curbs and gutters; have a posted speed limit of 25 or 30 mph; and 15% of traffic is at least 6 mph greater than speed limit. An advance warning sign with a 15 mph advisory speed limit is installed at any undulation(s).