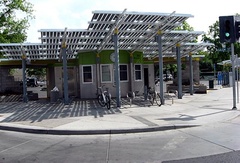 Face of the current Transit Center 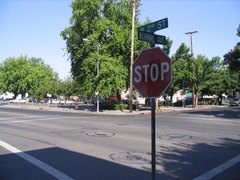 The Chico Transit Center is the city's hub for Butte Regional Transit. It is located at Second and Salem in the former site of the Hotel Oaks. From here, you can catch any bus that serves Chico to include regional travel to other cities such as Oroville. You can catch routes 1-10 (all local), 20 (Chico to Oroville), 40 (Chico to Paradise), and 41 (Chico to Paradise Pines).

In 2007, the transit center was temporarily moved to 2nd Street and Normal Avenue in for construction of a new center at a cost of $1.2 million. This new transit center opened on February 20th, 2008 but had a separate grand opening. The facility now has three shelters for travelers, benches, and public bathrooms. In addition, it is powered by solar energy, collected on the top of each shelter. The bus hub's central location makes taking the mass transportation ideal for students, downtown workers, and shoppers. However, one complaint about the new center is that regional travelers are still out in the winter rains and summer sunshine on the Normal Avenue side of the center.