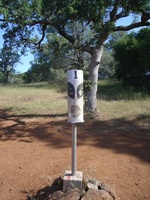 First hole of the course "Upper Bidwell Park Disc Golf Course", "39.774691","-121.732603" consists of an 18 hole "advanced" course located in Upper Bidwell Park. It is located along the Big Chico Creek Canyon off of Highway 32. The long course is open, but players should check with open or closed status before playing. Depends on wet weather thresholds and erosion concerns.

Controversy surrounded the Upper Bidwell Park Disc Golf Course. There are groups who have different views on disc golf play in the area. Friends of Bidwell Park and other environmental groups expressed concern about the environmental impacts caused by this form of recreation, and its suitibility in a blue oak woodland with shallow soils in many areas, along with concern for several plant species. The current agreement between the City of Chico and ORAI has several mitigation requirements in order to reduce environmental impacts to the site. Oddly, the course has been named after a raptor species that does not currently nest in the adjacent cliffs.

Anyone looking to play a round at this course should be advised that there is an abundance of poison oak. The entire course is quite rugged terrain, much like the majority of Upper Park. There are spectacular views of the canyon during the first half of the course. In addition to long pants (to avoid the Poison Oak), sturdy shoes and water are recommended, as the course is large and can be quite time consuming. Signage at the site, and bathroom is available. Dogs need to be on leash. Avoid the cliff area during raptor nesting season (see signage at site enterance). Bidwell Park rules apply to this site, including no alcohol, no glass, and a seasonal smoking ban.

To find the Upper Bidwell Park Disc Golf Course, drive up Highway 32 toward Forest Ranch. The entrance to the park is unmarked, but can be found on the left side of the roadway when looking for it. The turn is immediately after the intersection with Humboldt Road, right at the Adopt a Highway sign from Sierra Nevada Brewery. CalTrans permission for the turn off is still pending, and has been in the works for several years.