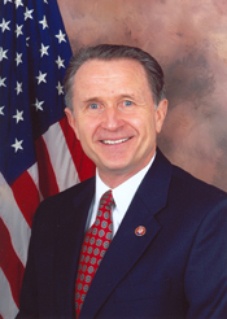 Walter William Herger Jr. (b. May 20, 1945) has been a Republican Congressman since 1987. Herger was born in Yuba City and raised on his family's 200-acre cattle ranch and plum farm in Rio Oso, which like Chico is in California's 2nd Congressional District. He is a Mormon and is married to his second wife, Pamela Sargent, with whom he has 9 children and 6 grandchildren.

Herger's political career began with his election in 1976 to the East Nicolaus School Board, where he served until 1980. From 1980 to 1986, he served in the California State Assembly. Herger was first elected to the United States House of Representatives in 1986 and has won each subsequent election. Being a member of the House means he must run every two years. He has never received less then 57.9% of the vote in his elections. This 57.9% came during the 2008 election when the Democratic party finally mounted a serious attempt to take his seat. He sat on the United States House Committee on Ways and Means and on the Subcommittee on Trade and the Subcommittee on Income Security and Family Support.

According to Herger's House biography, his main goals in the HOR reflect his position on the Committee on Ways and Means. His biography says that his main legislative goals are: (1) securing economic growth and encouraging innovation and entrepreneurship by reducing the tax burden on American families and small businesses; (2) making government run more efficiently by reducing federal regulatory burdens and spending; and (3) responsibly reforming entitlement programs to make them sustainable and ensure that they will still be around for future generations of Americans. 1. California's 2nd Congressional District is primarily an agriculturally driven area, despite rapid growth in some of its cities. Therefore, he has favorably voted for many bills and supported many propositions that have been beneficial to the agriculture community.

In 2008, the Democratic party launched a serious offensive in an attempt to take Herger's seat. They ran well known Trinity County Supervisor Jeff Morris in hopes that both his name in the district, as well as the fervor surround Presidential candidate Barack Obama would lead to a victory for the Democrats. The hope was that the large student population of Chico would have enough registrants in Butte County that it could potentially throw Herger's usually safe election up in the air. The Democratic party in 2008 fared far better then they had in the past, but still lost by well over 50%. As was later recorded, one of the few districts Obama failed to win in California was Herger's.

In August 2009, Herger was criticized for responding to a constituent who described himself as a "proud right-wing terrorist" at a town hall meeting in Redding by saying, "Amen, God bless you" and calling the man "a great American." The Chico ER wrote that the constituent actually meant to say "right-wing extremist" and that Herger may have understood it in that context at the busy town-hall meeting2.

2009-08-28 19:36:20   Usually it would annoy me to see that the latest edit to the page was another attempt to vilify Herger, though subtly done. It's one of the problems with wikis like this, on issues and representatives, eloquently worded harangues make their way into the section that is supposed to be deemed informational. Davis had this problem with the Davis Republicans for a while making notes on the pages of various issues and representatives and this is (at least in the political sense) the inverse. There are no listings of the committees he belongs to, how often he is in Chico, what his voting record is, among the other things that should truly be here. Instead, the last two substantial edits on this page have been listing his top contributors and a hyped up "scandal".

Let me clarify, in case this came off as too argumentative, because I am not trying to pick any fights, just to help people take a closer look at their editing. I don't mind that this information ended up as part of the informational section here. But maybe it says something about biased editing in what is supposed to be an informational site, not a political one. Had I come upon this page on my first visit to the Chicowiki, with no real prior knowledge of what wikis are or who could edit them, then it would be my last visit to it as well. I hope this resonates, because the political bias on this page, though again, subtly done, is annoying and alienating. —JohnNash

2009-08-28 22:23:24   Hi John. I get what you're saying although the last edit was about an event which actually made it on news nationwide. I'm not sure how else it could be framed except by explaining that the person that yelled that out actually meant to say something completely different (according to the ER). So I definitely think this article can be improved but I don't know if anyone can truly do that by themselves without putting some kind of bias in the article. Writing about a political person in a non-biased way is just... inherently problematic. There are certainly some positive things to say about the congressman and no doubt they should go here to balance any perceived negatives. The top 5 contributors edit was an interesting one that I didn't really find negative seeing as OpenSecrets contains this publicly available information on all candidates. It just seemed to be a factual listing. But again this is a very tricky area and we all perceive these things differently. No worries about voicing your concerns on this issue; it's pretty important! (no one wants to scare away potential new editors) —RyanMikulovsky

2009-08-29 17:12:55   I'd just like to add that I think refusing to include any negative information would be another form of bias that would be equally likely to scare away potential new editors. I think that any factual information should be considered perfectly fair and reasonable to include. If someone feels that there is a bias toward including predominantly facts that are likely to be viewed negatively, then that person should feel free to add more facts that they feel are likely to be viewed positively. The more facts are contributed by people of all political persuasions, the more useful the page will be. —queerbychoice

2009-08-29 18:08:04   As I said on my first comment, I think this information is prudent, just biased. If we want to be the SF Chronicle or the Wyoming Tribune, we can be. If we want to report only the facts that fit our particular persuasion and leave it up to the next person to put up useful or positive(/negative) facts, then so be it, whether or not we have them readily available.

I only moved to Chico in December, so despite the fact that I spend a large amount of time doing political research, I don't know as much about Herger as others do. So when I come to his page as I am preparing to switch my registration, all I get is this. My major point in my original comment was that responsible editing (as we call it- writing may be more appropriate in this case) should be done on an equal level. Like I said, if obtaining information about Herger (such as a voting record or committee membership) requires the same amount of research as it does to type in his name into opensecrets.org, then by NOT including it, any or all of us are being biased. Ryan, I don't deny your point, writing about a candidate whom you either favor or dislike will always be difficult when trying to remain neutral, but I feel an attempt must be made. If we want to label ourselves as a liberal or conservative wiki, then great, at least I won't waste my time. My impression was always that the goal of the wiki was to provide helpful and impartial information.

I came to this page after seeing a few new edits hoping I would learn more about the congressman who represents where I live, but instead read the kind of lean I would find in a rag like the SFC. I will do some research and update this page appropriately, but I (like I hope many other new residents of this town are doing) came here hoping for some quick info. This is a long comment just to make a plea for equality in editing. I won't lie that I have made a edit or two which favors my opinion on a subject, but it has never been this blatant or easy to rectify (I mean, someone went through all the trouble of posting links to him anyway). —JohnNash

2009-08-29 19:49:27   I am also sort of confused about the posting of the top 5 contributors. Maybe I am looking at the website wrong, but it seems to me that the list provided on this page is pretty flawed. On this page, there is no mention of Aflac, which is tied for #1 contributor with AT&T and Deere & Co. (which also does not appear on this list). The National Beer Wholesalers Association is #8 on the list and Massachusetts Mutual Life Insurance is #7. Granted I see these additions are about a month old, so could use some updating (once again, if I am looking at this site correctly). I think it should also be noted that the site is not Government affiliated (where you can also get your information and also for free) and is therefore susceptible to imputed bias. Not saying any is, I somewhat doubt it, but nonetheless, not the word of God (ie the government). Unfortunately, they apparently do not think of taking much into account the contributions made my individuals who work for these companies, as do most government agencies. I think that fact is almost more revealing and a better one for statistical analysis. —JohnNash

2010-04-30 14:45:46   Congressman Herger may be best known by defenders of the constitution as one of over 50 Republicans who co-sponsored legislation in '05 and '06 to eliminate the separation of church and state. Questionably titled the Constitution Restoration Act, HR 1077, the bill would have made it illegal for any judge to hear the appeal of any citizen who felt they had been disadvantaged as a result of someone at any level of authority placing a god's law above civil law. The pivotal line in the legislation stated that "God is the sovereign source of law, liberty and government" (in the United States) When confronted with this fact at a town hall meeting in Weed California during the '06 election cycle, Congressman Herger could not begin to paraphrase the content of HR 1077. When pressed, he expressed that he "couldn't be expected to remember" all the bills he was sponsoring. After having his legislation explained to him, his only defense was to claim (falsely) that the majority of the signers of the Constitution were Christians. When the overwhelmingly Republican audience was polled, they were unanimous in their rejection of a theocratic government. The congressman's response to the charge that he was not representing the views of his constituents was to say: If you don't like how I vote, "you can fire me." Mr. Herger ultimately eliminated the issue at the time by refusing to take any follow-up questions. There were 45 witnesses. —67.117.31.39