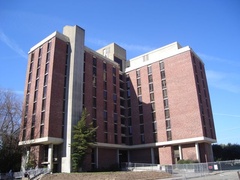 Housing at Whitney Hall, as well as Chico State's other on-campus residence halls, is generally reserved for first-time freshmen. As of the early 2000s, most rooms accomodated two students, with the exception of one larger room per wing on each floor that, due to the design of the building, housed three students. On each wing also resides a Resident Advisor (RA), whose responsiblities include enforcing policies, addressing/managing emergencies, providing information on campus/resident hall resources to residents, and running both educational and social programs within the resident halls. To become an RA one must apply through the University Housing and Food Service, usually in the spring, for the following academic year. On rare occasions an RA may be hired mid-year to fill a recently vacated position; it is only in extremely rare occasions that a freshman might be considered for that vacancy among potential candidates. Whitney Hall, due to its size, has at least two Directors and 16 Resident Advisors and rotates the availability of the staff 24/7 to ensure the safety and security of the residents in the hall.

Policies on decorating rooms over the years have been limited to posters or other decorations that are hung without damaging the walls (which must remain in their original white paint). Candles, halogen lamps, and cooking items with open elements are not permitted as they present a fire hazard. Indeed, significant damage was done to the 9B wing and 31 students were displaced in 2005 due to a computer battery overheating and catching some paper on fire which then lead to the room catching on fire; the only major fire incident to occur in Whitney Hall since its construction in the 70s.

Interesting trivia: Besides the two elevators, there are two of four firetower/stairwells that are available for residents to move about the building and to the outside. The other two firetowers are normally off-limits and locked to residents unless during times of emergency or drills. However, as of the early 2000s in the locked firetowers there remained painted messages from previous residents dating as far back as the 1970s. Any recent paintings/messages are usually the result of unauthorized entrance into these firetowers. However, there have been rare occasions that the UHFS authorized entry and decoration of these firetowers, usually for end-of-year or commemorative purposes. It is this author's hope that UHFS keeps, or at least documents, the rich history of not only Whitney Hall but of CSU, Chico that one can glean from those walls and decides against ever painting them over.

Whitney Hall also has a penthouse; a small room with a large glass window clearly visible from the outside. The penthouse usually contains extra couches, storage items, and has access to the roof of the building. Access to the penthouse (by elevator) is usually limited to Whitney Hall and other UHFS staff except on rare occasions for hall programs for students. As a result, despite the decidedly unglamorous condition of the room, the penthouse remains an object of interest and mystique to residents.

From 1973-1977, the penthouse was accessible to all residents, using the elevators. It contained a baby grand piano.