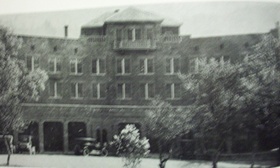 Richardson Springs (39.839973, -121.779055) is a historic place in Mud Creek canyon just north of Chico, off Cohasset Road past the Chico Municipal Airport. The resort was originally owned by the Richardson family (who first raised cattle on the land) and was maintained as a resort from 1903–671. At first, people from all over California came to these springs, especially from San Francisco. They came by the Sacramento Northern Railway to the Sacramento Northern Depot which was located in Chico at the North East corner of Main Street and East first Street, with the last portion of the trip by buggy2.

The property included four springs, all of which are still active. This includes a very smelly sulfur spring that must have had some benefit for the bather, since people subjected themselves to the scent for some reason, it is also ice cold. The rich and famous were known to go out there for a therapeutic soak, a stay in the hotel and a meal from their famous restaurant. Local lore says that Errol Flynn even stayed at the hotel at Richardson Springs in 1938 while he was in town filming The Adventures of Robin Hood. The facilities remained open as a spa until 1967, when it went for sale. It was bought by a religious organization in 1968 and became known as Springs of The Living Water3 and is now known as Youth with a Mission (YWAM).

YWAM uses the resort for religious gatherings and other conferences.

Historically, Richardson Springs was a ritzy resort with natural spring baths. For more information about YWAM and the facilities, please see the YWAM Chico website.

Since the resort's opening, reaching Richardson Springs has always required a journey along Mud Creek up Richardson Springs Road. A WWI era travel guide describes, "an excellent automobile road running from Chico to Richardson Mineral Springs." In 1917, one of the only accounts of the road itself was found in the minutes of a Butte County Board of Supervisors meeting. For reasons lost to history, Redman Richardson requested that the county abandon the road.  There is no record  of anyone doing more than fixing short sections or filling potholes since the road was originally paved.

The current owners and stewards of the historic place are in the process of raising funds to re-pave the road, as well as make other repairs and upgrades to the place to restore some of its historical grandeur. 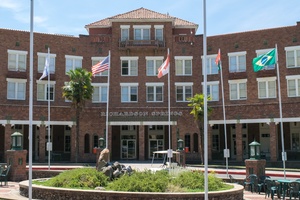 2008-10-29 16:29:07 Used to vacation there in the 50’s and 60’s before it sold. It was a magical place. I was a young boy. There was lots to do. The hotel was wonderful. I can remember bands in the evenings on the hotel veranda. The hotel had a great lobby, a gift shop, a soda fountain, cocktail lounge, dining room, TV room, “The Canyon Room” and bingo, which was a big deal back then. There were approximately 100 cabins of all sizes surrounding the hotel. The pool was great. There were three. The spa, I went there once. It was also great although I was too young to fully appreciate it’s healing qualities. I could go on and on. The “Indian”, at the top of the mountain in front of the hotel would light up at night. During the day we would hike up to the “Indian” it was huge up close and made from metal. There were trails to waterfalls, there was a “swinging” bridge, and of course the “stinking” mineral water which my grandmother would soak her feet in and drink. I think they called it No. 1 and No. 2 water. I spent about 10 summers there and will never forget that place. —70.134.82.42

2010-08-25 23:03:36 2010 My Dad used to visit the Springs as a child. His step-father’s maternal family were the Richardsons, & his Grandpa Charles Kindig & Grandma Monte (Richardson) Kindig lived & worked there. Dad always speaks about the Robin Hood crew, & was there to witness the feats of the fellow who actually knew how to shoot a straight arrow. (I do not recall his name at this moment.) My Dad also remembers one visit when Johnny Weismuller (of Olympic & Tarzan fame) was also staying at the Springs. He got a big kick out of the fact that he got to swim in the same pool as Tarzan! —71.131.16.35

2010-12-04 12:19:04 I worked at the hotel for the summer of 1958 (15 years old) washing dishes in the kitchen and staying in the workers dorm. It was a fun place to work. Movies outdoors at night, the soda fountain (free if the Soda Jerk was in a good mode) and the upstairs TV room where we watched Dick Clark’s American Bandstand on a “Huge” 25 inch black and white TV. I remember the son and daughter of the owners driving their new Thunderbirds which we sometimes drove to Chico to cruise the Esplanade or park at the Chicken Kitchen - burgers for 25 cents. Small bottles of the sulphur water was left at each room every night in case the guest wished to drink it. Most probably poured it down the drain. Most of the guests were from the Bay Area or Los Angeles. Fond memories! —69.226.123.52

2011-08-06 17:56:02 My dad used to take me there when I was a child in the 60s. I had forgotten about the large “Indian” until I saw it referenced in another post. When we would go there for lunch I would always order a “peanut-butter-jelly-butter sandwich.” I remember hanging out around the pool and walking around the cabins, where we stayed when we went. Good memories! Wish there were more historical pictures. B. Wood —72.29.214.34

2012-06-30 00:51:05 My grandparents used to go there and I thin I might have stayed there once too. I have a paper knife ( to open envelopes) with that famous Indian painted on it. The knife is made of copper and hammered around the edges to make it look old. Richardson Springs is painted on it. My grandparents loved to go there and to Paraiso Springs about 8 miles from Soledad. It too was shot springs with a sulphur spring as well. L.S. —204.195.69.189

2012-07-06 09:58:50 After seeing numerous photos of the glory days of this resort I finally got to visit. Although there seems to be no signs of the past history, only a few bldg foundations etc) the wonderful vintage “feel” is still in the air. The grand hotel, is still intact as is the dining area, still in all its glory. What a joy to meander the grounds reliving that era —99.23.241.37