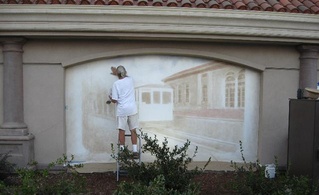 William EverOne adding another layer of sealant on the new mural at the rear of the City Plaza bathrooms. The Esplanade murals at City Plaza depicts a historic street car on The Esplanade and was painted using finely filtered mineral soil dug up from the general area of the photograph. In fact, it consists of up to 7 layers of fine earth, each of which were coated in latex and sanded to a smooth finish.

Sometime in May of 2008, William EverOne began sketching on the other side of the bathroom complex. The ultimate goal is to show a scene with the street car's rear. The task is monumental since it will all have to be conjured up by the imagination instead of working off a photograph. By mid-September the mural began to take on a life of its own with hushed sepia tones from mineral soil. The mural is different in that there are blue and red colors — pigments from rocks and minerals (which ones?) of Afghanistan and India respectively. Eventually shrubs will be painted in the foreground with a green stone or mineral from Africa. This new mural is funded by the City of Chico (also see Arts Commission). The original mural was funded by the Graffiti Abatement Program.