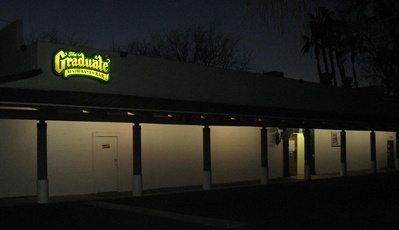 The Graduate at night on 8th Street

The Graduate is a Chico sports bar and restaurant with a massive, heavy door. They have many big screen televisions typically showing different sport events, making it an ideal location for drinking some brews, eating pub food, and enjoying a game. They serve typical pub food (burgers, fries, cheese sticks, nachos, steaks, etc.) and have about 50 different beers on tap, about a fifth of which are from our own local Sierra Nevada Brewery. Examples of specialty SN brews you'll likely never see in stores are Best Bitter Ale, Crystal Wheat, Blonde Ale, Vienna Lager, Kellerweis Hefeweizen (new in 2009), and seasonals. Of course, they're a full service bar!

To order from the kitchen, you'll have to first grab a menu from either side of the kitchen window, and then get in line. The line to the kitchen can get rather long between 6 and 7pm. After you order, they'll call your name and you can grab your meal.

Seating includes benches, perfect for large gatherings, and standard round 4-5 seat tables. If you're craving for some action, they've got a row of arcade games, an air hockey table, and four pool tables. So while The Graduate may seem like a place for grown-ups to socialize with drink and enjoy fried foods, it's also a rather popular place to bring kids at certain times!

There are a few restaurants in California by the name of "The Graduate" that are related to this one. They are found in other college towns, such as Davis, San Luis Obispo, Stockton, and Tucson(Wildcat House). As the name (and location) might imply, they do cater to the college crowd. It was announced that the Graduate would be closing and serving it's final drinks on December 13th, 2015. Chico will be sad to see it go.

2009-09-21 17:03:33   The only SNB beer listed that is now available in stores in Kellerweis. However, SNB will soon begin selling growlers to go, so all of them will be available for sharing with friends in the environment of your choice.