A website about Chino Valley, AZ that anyone can edit 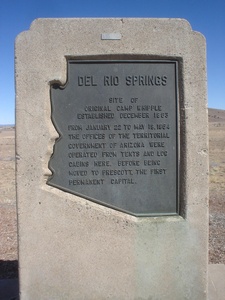 Welcome to the new LocalWiki region for Chino Valley, AZ!

Located approximately 31 miles south of Interstate 40 and 26 miles north of downtown Prescott, Arizona, sits a historical marker at Del Rio Springs marking the Arizona Territorial Capital at the original Camp Whipple. Camp Whipple settled here in December of 1863. Legend states scouts were looking for Thumb butte, which is locate in Prescott, and instead stopped at Little Thumb Butte.  Others say it was simply a place to stop for clean water and flat ground before moving on to Prescott. As with most historical legends, the truth is probably both, or somewhere in the middle.

This site was the location of the Territorial Capital operations for a short time, January 22 – May 18, 1864, before moving on to what we now know as Prescott, Arizona, which then became the first official capital of the state.

From the Chino Valley Chamber of Commerce, http://local.townsquarepublications.com/arizona/chinovalley/history.html :

When Lt. Amiel Whipple of the U.S. Army Calvary first scouted this area, he noted the great expanses of grassland before him, called by the Mexicans “de china,” from which the valley derives its name. The abundant grass was harvested as hay for livestock and served as the primary feed for the U.S. Calvary in this area.

Chino Valley has the distinction of being home to Arizona’s first territorial government, which was established in 1864, 150 years ago, at Del Rio Springs just north of Chino Valley. According to the Chino Valley Historical Society, military leaders chose this site because it offered “good water, firewood within 2 or 3 miles and building timber of the best quality. The neighborhood abounds in deer, antelope, turkeys and other varieties of game.” Del Rio Springs was also the source of “the river” (del rio), later to be known as the Verde River.

To celebrate the 150th anniversary of Del Rio Springs’ designation as the site of Arizona’s first territorial capital, the Chino Valley Historical Society hosted “Governor Goodwin Arrives,” a recreation of the first Governor’s arrival at the site, complete with an eighteen gun salute, historical costumes, and a dutch oven barbecue. The program was attended by an overflow crowd of local citizens and officials, and produced for broadcast on Channel 13, Prescott’s public access cable television channel. A commemorative DVD is also available for purchase.

A few months after Goodwin’s arrival, Fort Whipple was moved from Del Rio Springs to Prescott in order to provide protection for the population of gold miners located there. Fort Whipple is now a beautiful collection of stately white structures which house the many services of the U.S. Veterans’ Administration.

Arizona’s territorial leaders opened the door to our beautiful valley, and it didn’t take long for settlers to start homesteading the land and growing hay, corn and wheat, thus beginning Chino Valley’s long history of farming and ranching. The Del Rio Springs area became central Arizona’s largest ranch at that time. Later, the city of Prescott bought the Springs and surrounding land in order to provide water to its residents through a 19-mile pipeline. The city also sold water to the Santa Fe Railroad, which in turn sold the water to Ash Fork and the Grand Canyon. Today the land is privately owned, and Del Rio Springs Partners recognizes its historical significance and continues to work with the community and state to preserve it.

The railroad came through Chino Valley in 1887 and signaled a new era for our town. First was the Prescott and Arizona Central and then the Santa Fe, Prescott & Phoenix line. The standard gauge railroad served to transfer materials between the Santa Fe railroad and the nearby mining town of Jerome, which was served by the United Verde and Pacific narrow gauge railroad. Jerome Junction station was built just east of Chino Valley and came to include a coal and water depot, Wells Fargo office, Post Office, stockyards, a school, a hotel and a saloon. When the railroad abandoned the narrow gauge railway, most of the buildings were moved to Chino Valley, and the Jerome Junction Hotel was renovated and moved to the grounds of Knotts Berry Farm. The Jerome Junction site can still be seen when traveling East on Perkinsville Road.

In 1909, the Atchison, Topeka and Santa Fe Railroad joined with the Fred Harvey organization to provide the Fred Harvey Houses along the train route with milk, eggs, meat and vegetables produced at the nearby Del Rio farm. This longtime and beneficial arrangement ended in 1956, as railroads declined and activity moved closer to the State Highway 89.

Beginning in the 1910s, as railroad activity decreased at Jerome Junction, settlement activity moved toward the central area of Chino Valley. The Hassayampa Alfalfa Farms, Prescott Farms, and others, were promotional companies that encouraged agricultural growth in Chino Valley.

Just to the north of Chino Valley and Del Rio Springs lies the rural community of Paulden; followed by Hells Canyon, which once challenged stagecoach travels until a railroad bridge was built across it; and the small settlement of Drake, which is now home to the Drake Cement Plant.

Chino Valley homesteaders became Chino Valley farmers and ranchers who persevered through changing climates, social priorities and increasing costs to be successful with cattle, dairy cows and crops such as alfalfa. Ranches and farms continue to drive the economy of Chino Valley today, and this rural quality is what attracts many new residents to our quiet town.

From Echos of the Past, a collaboration of the Yavapai Cowbelles

Echoes of the Past

...... Upon a wind-swept knoll, almost in sight of the historic house, (no longer there) there is a marble monument marking the burial ground of the family of Shivers.  It is believed that one of the unidentified graves that are in evidence about the central marble shaft, is the final resting place of Hannah Shivers Postle Rees. On one face of the marble is plainly inscribed the name of her mother, Mrs. D. W. Shivers: born March 18, 1830; died March 9, 1899. On another face are names believed to that of her brother, John and his wife. One of the footstones marks the grave of her father, D. W. Shivers.

An observer who kneels to peer closely at the weathered lettering upon the base of the monument on the northward side may read in letters almost defaced by time:

The light of her young life went down

As sinks behind the hills

The glory of a setting star-clear,

That might have been said of Hannah, because-whichever her particular plot may be in relation to the marble monument marking the general family burial area-we are assured that Hannah lies not far from the historic house which was her home, and almost within sound of the gurgling waters of the great Del Rio Springs which we know as a source of water historically important in the development of a part of the West-but which was beloved by Hannah as the spring which watered her home- stead on the Arizona frontier at Casa Del Rio.....

Other references and interesting pages:
http://local.townsquarepublications.com/arizona/chinovalley/history.html