Check Out These Supposedly Spooky Locations in Crystal Lake 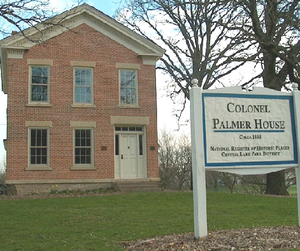 According to local stories, the Palmer House (www.crystallakeparks.org) is the center of ghostly activities such as the sounds of children stomping on the floor, scratching at the door and crying. Locals report seeing apparitions of children's faces appearing periodically in the windows in the basement. According to hauntedhovel.com, the faces of the children have appeared on a select number of photographs. The stories of the hauntings stem from the history of the house, which was built in 1858. Through the years, the house was passed down through the Palmer family and eventually sold. Reportedly, one of the house's owners ran an orphanage there where he beat and allegedly killed some of the children. In 1979 the house was donated to the City of Crystal Lake and is open for public tours.

The Fountains at Crystal Lake

According to Shadowlands.net, the Fountains at Crystal Lake (watermarkcommunities.com), a retirement community, is the site of several paranormal activities. Local legends tell of a disappearing woman wandering the upstairs hallway and reveal accounts of game pieces on a checkerboard spontaneously moving in the recreation room. People have also told of hearing unexplained footsteps and having feelings of being watched while walking in the basement.

According to local legends, the property housing the Crystal Lake Barnes & Noble bookstore (barnesandnoble.com) was once owned by a woman who died on the land. Her will bequeathed the land to a local church to be used as a school. Locals report seeing an apparition of an old woman in parts of the store, and some employees have reported seeing items moving and book carts wheeling on their own.

No list of haunted places would be complete without mention of at least one cemetery. According to the Shadowlands site, visitors to Mount Thabor Cemetery (cl-mtthabor.org) have reported seeing strange balls of colored light in photographs taken throughout the cemetery. Other reports include sinister-seeming shadows accompanied by green mist surrounding the graveyard.

Nearby seasonal haunted houses include the McHenry Area Jaycees Haunted House (mchenryjaycees.org) held in the Barn at Knox Park in McHenry, eight miles north of Crystal Lake. A tour of the haunted house takes about 10 minutes, depending on how quickly your group moves, and it features a number of spine-tingling sights in each of its rooms and hallways. The event takes place annually in late October. The Illinois Railway Museum's Terror on the Railroad (terrorontherailroad.com) offers a fresh twist on the classic haunted house. Located 13 miles west in nearby Union, the attraction includes tours of two haunted trains, one that moves slowly along the tracks and the other a stationary train. The haunted railroad is open on Friday and Saturday nights throughout October.

Haunted places close to but not in Crystal Lake can be found here.