There is a big dam in Lake View Cemetery, which is a tourist attraction of sorts for visitors to the Lake View Cemetery.. It is part of the Northeast Ohio Regional Sewer District (at the time the Cleveland Regional Sewer District), was completed in 1977, and dedicated in 1978. At that time it was the largest concrete poured dam (67, 000 cubic yards of concrete) east of the Mississippi River. It is also still the largest dam in Cuyahoga County. It measures 500 feet across, 60 feet above grade, and 30 feet below grade. It can hold 80 million gallons of storm water. Its maximum discharge is 13758 cubic feet per second and its capacity is 354 acre feet. It drains an area of 2.28 square miles. The initial cost of the dam was 6.3 million dollars (23,5 million in 2012 dollars). Before the dam was completed, in 1975, the cemetery trustees sued Cleveland Heights and University Heights. The trustees wanted to stop the growth of the municipalities' sewer systems upstream to the south because it would potentially increase the flooding of the west branch of the Dugway Brook. Peter Zicari of The Plain Dealer claimed that the trustees wanted to "protect University Circle from Dugway Brook". The cemetery donated 10 acres of land for the dam and the dam was built and dubbed the Lake View Cemetery Flood Control Dam. There was a fair amount of public criticism at the time due to the cost and scope of the project seemingly being beyond the severity of the issue at hand. The dam is sometimes used by local firefighters to train for scenarios that require repelling and rescues at height.

Edit:  I worked on this dam in the summer of 1978 and it was not yet competed then (we were still pouring concrete), so it was not completed in 1977. 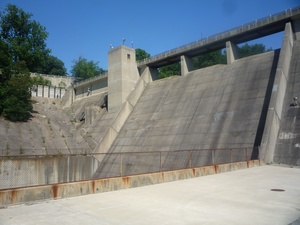 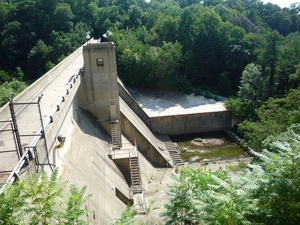 A view of the large dam in Lake View Cemetery.