The main page of the city is http://www.cityofconway.org/

The main decision making body is the city council, composed of the mayor, and two aldermen from each ward. Roughly, the wards split east/west at Donaghey, and north/south at College.

The city council generally meets Tuesday nights. In theory the meetings can be watched on ConwayCorp, but generally the sound is not good enough. Special meetings often take place before the main meeting.

All requests for placement on the Conway City Council Agenda (along with all written backup material) must be in the Mayor's Office no later than 12:00pm (noon) seven (7) days prior to the meeting.

Conway is in the 2nd congressional district (AR2) 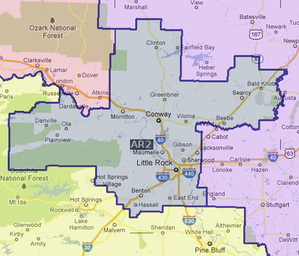