Approximately 15 miles northwest of the city of Fort Lauderdale, Florida lies the town of Coral Springs.  It is an incorporated town with its own police and fire department as well as a hospital and other essential services.  The history of Coral Springs, Florida is not that old.  In fact, it is just a few decades.  It was originally established in 1963 and had only a few buildings, a swamp, and was a part of the Everglades.

In 1964, the original land developers, Coral Ridge Properties, decided to erect a covered bridge spanning a canal located on 95th Street just south of Wiles Road.   One side of the bridge boasts "Welcome to Coral Springs" and the other side says "Hurry Back to Coral Springs." 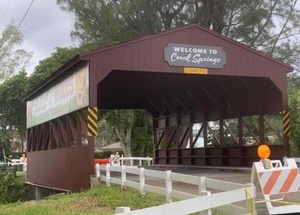 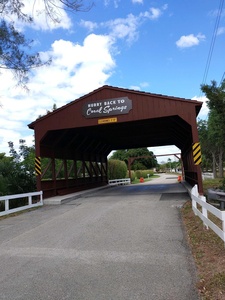 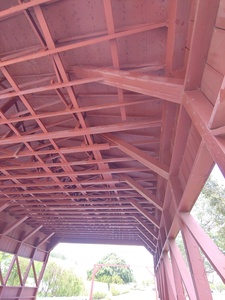 Designed by George Hodapp, Coral Ridge Properties built the bridge as the entrance to the new City of Coral Springs as a sales technique.  He decided to build it in “Colonial Style” as one would see on many covered bridges in the Northeast.  Known as “A City in the Country,” Coral Springs was proud to have the Covered Bridge known as the first structure to be built in the new city of Coral Springs.  The bridge was built along the historic Bridle Path near the Coral Springs Saddle Club Ring.

Although designed by George Hodapp, the bridge was actually built by Lewie Mullins and George Porter as well as other Coral Ridge Property employees.  It is 40 feet in length and hosts a single steel span.  Although it was originally painted in “barn red”, Coral Ridge Properties decided they wanted the bridge to have a more weathered look.

So they contacted American Snuff Company in Winston-Salem, North Carolina to paint a mural on the bridge.  Therefore, a mural was painted on the East side of the bridge.  It is the Bull of the Woods mural dating back to 1876.   Unfortunately the mural as it is today can only be partially seen due to private properties that were constructed near the bridge.  Over the years the bridge and mural has been restored and repainted. 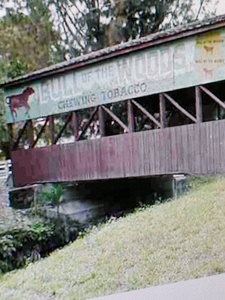 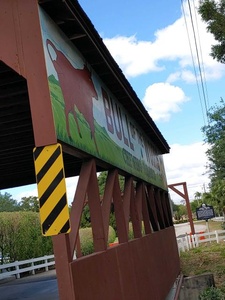 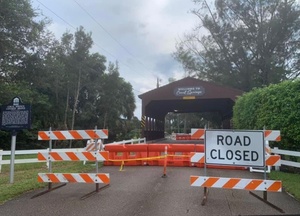 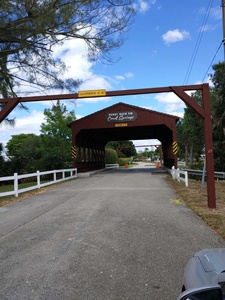 The Covered Bridge has had its problems however.  During a time frame of the past 10 years, the bridge has been struck 6 times.  The last time was in September 2020 when a vehicle towing an excavator struck the top of the bridge then departed the scene, according to police.  Subsequently, the bridge was closed for over three months so repairs could be made.

To remedy the situation of the bridge being struck by an over height vehicle in the future,  the bridge was closed for over 3 months to repair the damage.  Also, crews constructed bars along with yellow warning signs on both sides of the bridge.  The hope is that drivers will see the warning and backup; but if not their vehicle would strike the bar which is situated about 50 feet before the actual bridge.   The cost for this was almost $14,000 and was covered by insurance according to authorities.  https://www.tapinto.net/towns/coral-springs/sections/government/articles/coral-springs-covered-bridge-reopens-with-new-bars-to-prevent-more- 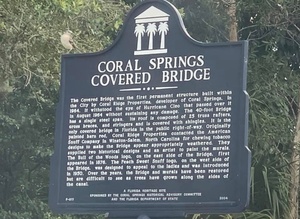 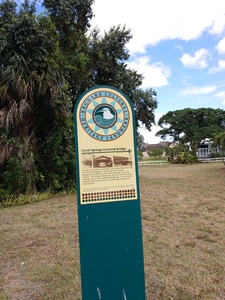 A commemorative plaque was placed on the north side of the bridge that tells the history of the Covered Bridge.  One can park and read it easily.  This covered bridge is the only one in the state in the public Right-of Way.  Also on the South side of the bridge there is a Florida Heritage Site Marker in recognition of its architecture and historical significance to the state. https://thefloridachannel.org/videos/historical-markers-coral-springs-covered-bridge/

Anyone wishing to visit the Covered Bridge can easily find it.  It is not far off of the Florida Turnpike or the Sawgrass Expressway.  One can simply input “Covered Bridge Coral Springs” into their GPS and navigation will bring them right to the bridge.   The area has a bike path so it is accessible via bicycles.  One can also walk through the bridge and there is a concrete elevated walkway on both sides of the interior.