Brief History on the Area:

Vancouver Washington was founded in 1825, after Dr. James McLoughlin moved the Hudson’s Bay Company upriver to the area now called Fort Vancouver. The city of Vancouver is located at the southwestern region of the state, nestled on the Columbia River’s northern banks and is near its union with Oregon’s Willamette River.  The city is named after Captain George Vancouver, the British voyager who diagrammed, in detail, the Northwest coast in 1792. In the late 1800s, the Columbia River thrived with new industry. A directory from 1891 listed five sawmills, two sash-and-door factories, a box factory, three brickyards and a brewery owned by Henry Weinhard. The entire area was a transport hub with a ferry landing, rail stops and hotels [1.2].

Between the early 1900s and 1997 the waterfront district housed several large industrial businesses: two shipyards constructed by G.M. Shandifer Construction (a steel ship facility and one for wooden ships), closing in 1921 [1.2], the Kaiser Shipyard which was established in 1942, reaching peak employment in 1944 (38,000 employees) [5] and then a paper mill, constructed in the late 1940s that operated until 1996 --then the Columbia Waterfront LLC purchased the plots in 2008 [1.2] and began preparations for development of the Waterfront Park Project in 2009. 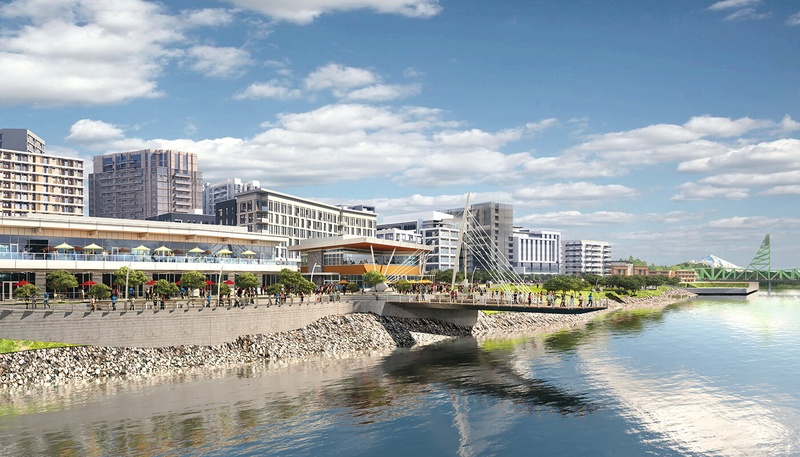 The project was conducted using public/private collaborative efforts from the City of Vancouver, Columbia Waterfront LLC and Gramor Development, Inc. This is a $1.5 billion commercial and residential project that has been in the making for nearly a decade. Their master development plans for the waterfront region west of the I-5 Bridge (also known as the Columbia River Interstate Bridge) were approved, by the City of Vancouver, in 2009 [3] [4]. While the Waterfront Park area encompasses a mere 7.3-acre development, the entire endeavor consists of 32-acres of high density, mixed-use urban redevelopment space –this includes retail, office and restaurant space, a hotel and several residential units [2]. Upon completion, this new urban neighborhood will bring more than 10,000 jobs and over $385 million to the economy of the region during the course of the next twenty years [1.3].

The Grand Opening for the Vancouver Waterfront Park was September 29, 2018. The park surroundings are still under construction (as of October 22, 2018), however, you are able to see the features it will offer to the public quite nicely. There is an overwater cable-stay pier (Grant Street Pier), waterfront trail (Renaissance Trail) that extends past the park, an urban beach and open lawn space for picnics or relaxation. There is also a play area for families to visit which is coupled with basalt seating areas throughout [2] . The designers and architects that worked on this project are as follows: PWL Partnership (landscape), Larry Kirkland (public art designer) and the architectural lighting design firm Fisher Marantz Stone [2]. It has been established as a ‘go-to’ for the local communities and is being remarked as a guide to follow as Vancouver, WA, and Portland, OR begin urban renewal projects in the future.

The designers for the buildings along the northern bank of the Columbian River were thinking of sustainability when constructing them. The structures are aligned with entertainment locations facing north and south. There are plenty of double-paned windows used along the exteriors to receive maximum natural light, without being direct and harsh. The eastern and western facades of these structures have minimal windows and all sides are established with considerate overhangs that shade them appropriately. Patios are present with the retail and restaurant buildings so the patrons can experience the natural environment while still having an intimate experience within the businesses. Along the walkways of the riverfront, people can experience a light and airy surrounding with iconic views of the bridges down the river and Mt. Hood in the distance. This location was developed thoughtfully and with the futuristic thinking of combining work, play and livability within a neighborhood. The efforts to improve the location of the Vancouver Waterfront area are prevalent in it's overall design. It is sure to be a place people bring their family and friends to visit and without a doubt a tourist destination for the masses. 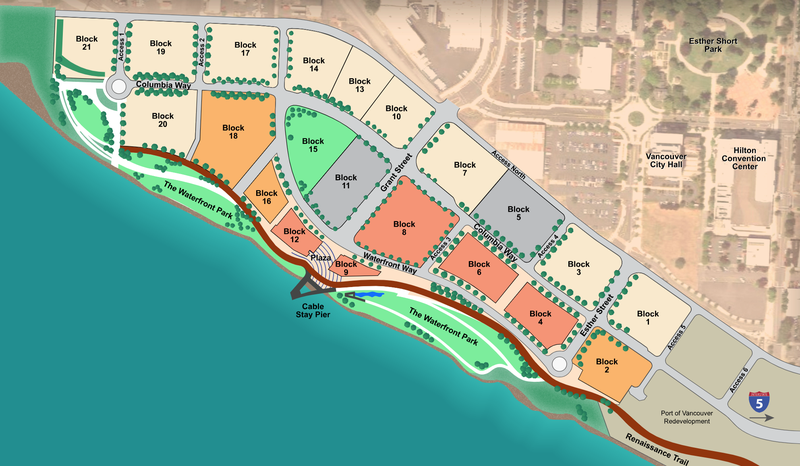 Sketch of blocks to be developed along waterfront acreage. 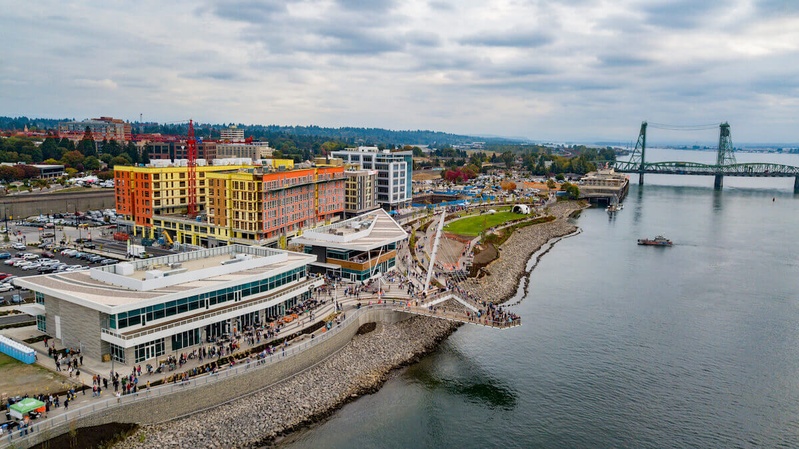 Julie Hannon, the city of Vancouver's Parks and Recreation Director released a statement to the Portland Business Journal stating,
"The pier serves as an iconic anchor of what will become an amenity-rich new waterfront park." [4] 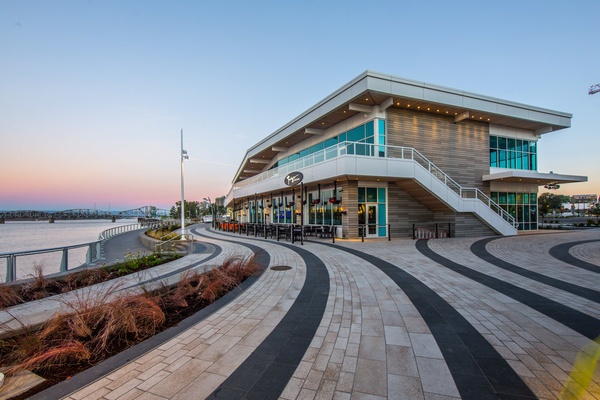 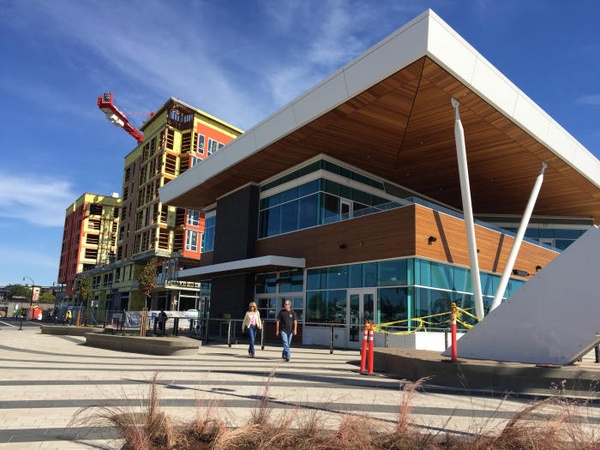 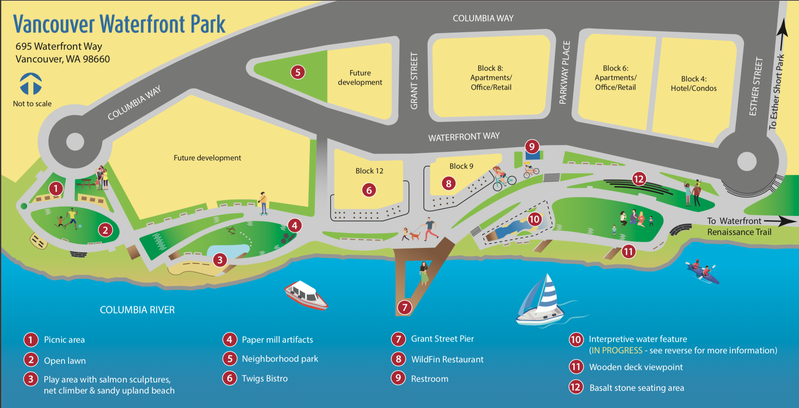 Detailed sketch of the amenities surrounding the Waterfront Park

For more video footage of the Waterfront Park Project construction process, please visit the City of Vancouver's website at https://www.cityofvancouver.us/waterfrontpark/page/waterfront-park-project