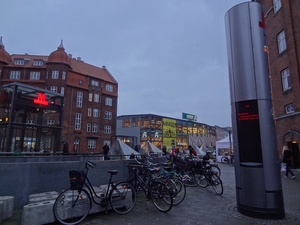 Amagerbro Station is an underground metro station serving the M2 line of the Copenhagen Metro, and the first station from the city on the island of Amager.  It is located in the Sundbyøster tax district of Copenhagen in zone 1, with connections to the local bus services.  There are two tracks at this station, where the M2 line terminates at Vanløse or Københavns Lufthavn, Copenhagen Airport.  From this station, any user has quick and easy access to the city center.

Amagerbro Station is located between the metro stations Christianshavn to the north, and Lergravsparken to the south east.

It is near the corner of Amagerbrogade and Holmbladsgade, more directly on the small street Blekingegade.

The station is clearly marked with the visible metro sign and glass pyramids, all of which are iconic to metro stations in the Copenhagen area. 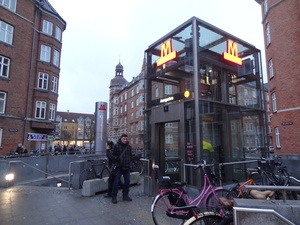 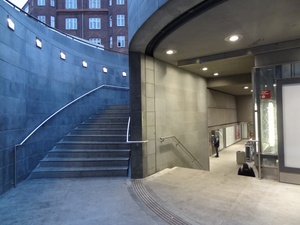 The station has above ground bicycle parking facilities, as well as an underground-indoor option for bicycle storage.

On the first floor below ground, one is able to select and purchase a variety of transportation options, such as a single trip ticket, 24 or 72 hour City (zones 1-4) pass, 24 hour all zone pass, flexikort, or klipkort (available until 8 February 2015).  One is also able to check in and out of the transportation system via the blue lighted circles located inside the station2.

The station is handicap accessible, with not only stairs and escalators as options, but a fully functional elevator from the street level with stops to the first level and the second where metro boarding occurs.

Automatic glass doors serve as a barrier between the passengers and the railway itself, making the waiting area safe and efficient for users.

Illuminated signs at the entrance to the station, as well as above the tracks, display which train corresponds to that side, as well as the expected waiting time for the next train. 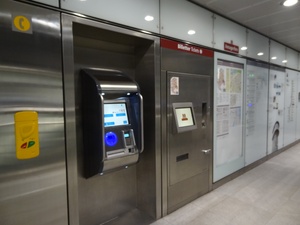 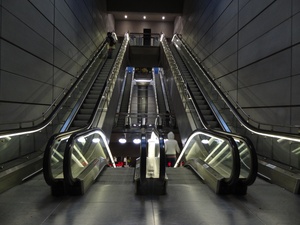 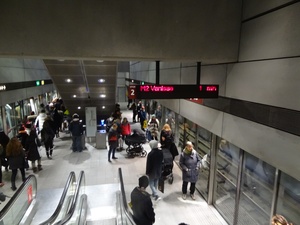 The initial planning for a metro system in Copenhagen began with the passing of the Ørestad Act by the Parliament of Denmark on 24 June 1992.  The construction for Amagerbro Station, however, did not begin until November 1996, with the digging of the tunnels for the first nine stations completed by September 1998 (stations between Lergravsparken and Lufthavnen were later proposed for additions as above ground stations in 1999).  All of the initial work on the stations itself lasted until February 20011.

After financing, laying the tracks, and supporting the test runs required for a driverless train, the completed underground metro section from Nørreport to Lergravsparken, including Amagerbrogade, opened on 19 October 20021.

Recent renovations were completed on the main double staircase in January, 2015.

Smileys Kebab, a local favorite, is a small food truck that sells quality kebab and falafel for a low rate.

There is a flower stand directly in front of the station stairs, which offers fresh flowers year round for a good rate, with a wide variety of types and colors, as well as potted plant options and various fruits.

Amagercenteret is a medium-sized shopping center with an assortment of stores, including Irma, H&M, Tiger, Matas, Føtex, Bøgs & Ide, a small food court, and more.

Amagerbrogade is right in front of the station, making the shops and stores on the street easily accessible.

The seasonal sale of Christmas trees also occurs in the open space above the metro.