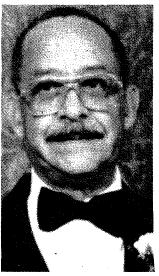 Mr. Alexander retired from the Champaign County Sheriff's Department in 1978, after thirty-two years of service. He received several awards for his service to the community and was recognized for his work with juveniles as a law enforcement officer. In June 1976, Mr. Alexander received a Governor's appointment to serve as a member of the Illinois Commission on Delinquency Prevention. He passed away Tuesday, March 30, 1982, at Carle Foundation Hospital. He was preceded in death by his parents. His family includes Peggy Anderson of Terre Haute, Indiana, and Carol Lewis of Danville, Illinois; two sons, Albert Jr. of Brooklyn, New York, and Steven H. of Springfield, Illinois; three brothers, Nile Alexander of Humble, Texas, Hugh Alexander of Urbana, Illinois, and Eugene Alexander of Chicago, Illinois; five grandchildren and several nieces and
nephews.