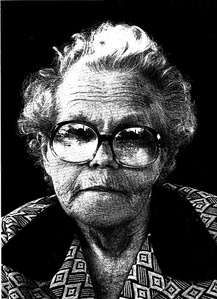 The following comes from an interview with Alma Gems conducted in the early 1980s: "I was born on October 19th, 1902, in Epenwohrden, a small village in the northern part of Germany. I lived there during the first World War, 1914-1918. After the end of the war prices went sky high and they kept on rising day after day. Unfortunately, the wages did not follow fast enough, so that by the time the money reached us, it was practically worthless. Two of my sisters were in the U.S.A. at that time. They sent us once in a while a few dollars, that was a big help. I received four Marks and twenty cents for a dollar. In 1923 I decided to go to the
States and earn some dollars for myself. In Spring, 1923, I came to La Grange, Illinois. I worked for several years in a private home for eight dollars a week. In Fall, 1923, I went to night school in Hinsdale and also took some private lessons in English. After a few years I took a business course at the Gregg Business College in Chicago. After finishing it, I obtained a job in the office of a railroad company as assistant bookkeeper. In 1930 I went for a trip to Germany which I enjoyed very much. After coming home I had to go to work to build up my savings account which was very much depleted. My trip took care of it. In 1931 I met my husband at a German Day celebration. A year later we got married. We have one daughter. She was and still is a realjoy to us. It's nice to be old! I say that now that I am feeling better and can do much more for myself. I felt useless a few years ago when I was too sick to care for myself in any way. I did not care if I lived or died. No activity is a gloomy life. I think old people must fight to keep doing as much as possible for themselves.
When you start letting people wait on you and do everything for you it is a bad way to live ... I cannot read now for very long periods. But I keep my mind active by talking to people and listening to people. I like the way kids are brought up now. They are not taught to keep quiet unless spoken to, but to express themselves. That helps them in later life."

When she was young, Mrs. Gems recalls, "I was a very shy child, sometimes afraid to answer when people talked to me. I wanted so much to be liked and talk free, like other children, but it took a long time to overcome this shyness. For instance, once we visited my uncle and aunt in a different town. My uncle was a school teacher, very stern and respectful looking. My aunt took me in the kitchen and offered me all sorts of goodies and asked what I preferred. I was so choked up I could not bring a word forward. She called me a very stubborn child. I had trouble holding the tears back. I remember several instances like that."