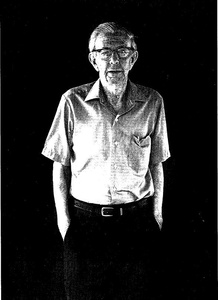 A native of Harper, Kansas, Mr. Brunk came to Urbana in 1945 when he was 41 years old. He worked as an insurance agent from 1948 to 1974. He also worked for the Illinois Department of Public Welfare in the Division of Delinquency Prevention. He has always been very interested in helping young people. In his early adult life he was a scout master and for many years he worked with young people, especially underprivileged children in Southern and Central Illinois. When he went into the insurance business he continued his work with young people through the Presbyterian Church of which he was a member. His seven grandsons and two granddaughters have always been a special delight to him. He enjoyed camping and each summer took car trips with his family. According to his wife, "he had an enthusiasm for living and a capacity for fun matched only by the kids he worked with."