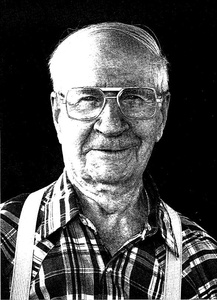 Mr. Hardyman was a carpenter and a cabinet-maker. "I remodeled my own home in Homer. When I was a young man just starting out I worked for three years at a grain elevator. The owner kept telling me he was saving my wages for me. He never did pay me. Once in a while you run into folks like that. Not often I hope!" he remembered in 1984. Mr. Hardyman also loved cars. "In the early 1920s I got a Ford and thought I'd never get it paid for. I owned a lot of cars. "Once I drove all the way to Florida. "I've had a happy life. Some folks thought I was stubborn, but I just did what I thought was right." He is most proud of his two children. "They're real nice people." He says, "I've seen a lot of change in the towns around here. They are still changing. They call it 'progress!'"