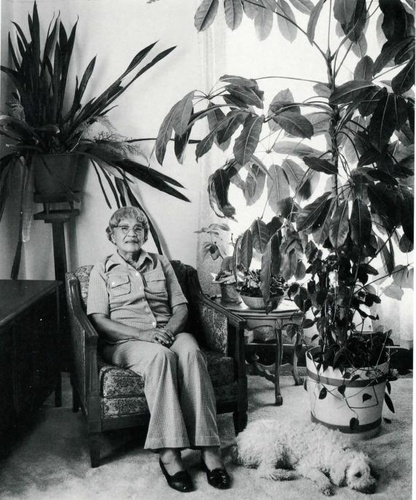 Carrie Nelson, 1983Born Carrie Gilliepie-Earnest in Chuckey, Tennessee, just outside of Greeneville, Mrs. Nelson moved with her grandparents Oliver Franklin and Hester Earnest to Homer, Illinois in 1902 when she was two years old. "My grandparents were slaves, freed in 1865." "They hewed cabins for themselves in Tennessee." But after a flood in the region, the government transported them to Illinois. When she was sixteen Mrs. Nelson moved with her grandparents to Champaign so they could be near her uncle  William Frank who entered the University of Illinois in 1916 majoring in Agriculture. About the time the family move to Champaign, World War I began in Europe and after his freshman year at the U. of I.  her uncle "Frank" like many young men at the time was caught up in the ferver to serve and enlisted.  On September 17, 1918, in Argonne, France Frank died, becoming the first person in his company to be killed.  By his side was his friend Cecil Nelson who would return to Champaign and marry his niece Carrie.  They had six children: Cecil Jr., Earnest, Ellenor (Conrad), Estelle (Merrifield), Hester (Suggs) and Eunice (Rivers).  All of whom attended college. Her oldest son, Cecil Jr. was a commercial artist, graduated in the upper 3% of his class at the U. of I., and one of her daughters Hester Suggs was principal of Washington School. "My children are all doing something worthwhile."Mrs. Nelson has worked as a maid and later as a cook for a fraternity on campus. After her retirement she studied early childhood education at Parkland College for one year in 1977 and then worked as a teacher's aide in a day care center until 1982.