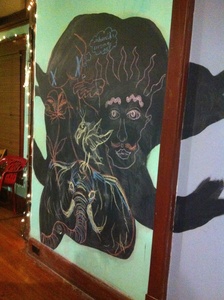 The Cedar Alley Co-op was birthed in August of 2014. Originally named "Cabin in the Woods", the co-op underwent a name change in its first semester and is now named after the alley behind the house, which the first generation of housemates felt was a more fitting name. Like, seriously, it's not a cabin; it's not in the woods; and it's not a horror movie. C'mon.

Multiple open mic nights have been held at the Cedar Alley co-op.