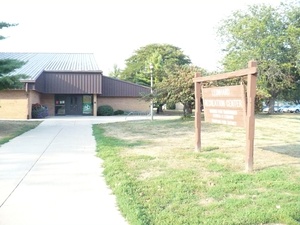 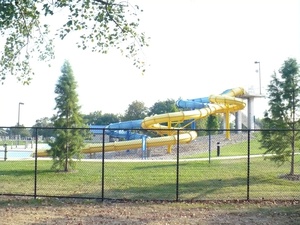 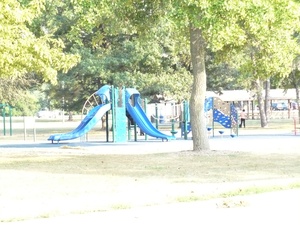 The Champaign Park District is the municipality association responsible for the award-winning parks in the city of Champaign, Illinois. With over 500 acres (2 km²) of parkland within the city limits, Champaign has one of the highest ratios of park land to developed land of any American city.

The 12.5 acre (51,000 m²) West Side Park is located in downtown Champaign, blocks away from the busy streets and within full view of City Hall. Originally zoned for the city square and future county courthouse (which was later sited in Urbana, Illinois), it became in 1859 the first park in the system. Known as the commons when it was first created, it was in 1861 designated as a public cow pasture where any citizen might graze their cow for a fee of $0.35 per month.

Benjamin F. Johnson (1818–1894), an executive of the Illinois Central Railroad, donated $10,000 to the city for the building of a statue and bandstand in the commons. Sadly this was not completed until five years after his death. The statue "A Prayer for Rain" was sculpted by Edward Kemeys (1843–1907) and placed atop Johnson fountain. Both were dedicated to the project's benefactor in 1899.

Other notable monuments in what is now known as West Side park include the Lincoln Monolith, and several statues and plaques commemorating the Indian War.

Dodds Park is located in Northwestern Champaign near Parkland College. This 110 acre (445,000 m²) park (roughly one fifth of the total Park District holdings) is noted for the "Tribute to Olympic Athletes Monument" on its grounds. The park was purchased in 1969 for the sum of $298,495.

The "Tribute to Olympic Athletes" was created to honor those residents of Champaign County who have competed in the Olympics. To date nearly 30 athletes are commemorated on the monument, and the competitors from the 2000 and 2004 games have yet to be added. The monument consists of several rising plateaus forming a walkway leading to a large granite gateway. Beyond the gateway a pedestal overlooking the playing fields in Dodds Park is inscribed with the names of those who have represented Champaign County in the Olympics. A full list of athletes can be found at the official website.

Also located in Dodds park is the "Prairie Grid Sculpture", a 1978 sculpture by Barry Henemann that somewhat resembles a horse. Originally contracted to be displayed for one year, it has since become an odd landmark of the park.

The particular Champaign Park District operations division that maintains the sports facilities at Dodds is often considered to be the elite work force of the organization. In 2007 they were awarded the prestigious ILSTMA Field of the Year award under the leadership of Mick Tempel who left the Park District in 2008 to become the assistant superintendent of the Champaign Country Club. Other noteworthy recipients of the award include Timothy Hagley, a resident of Champaign, and Kyle Smith of Mattoon Illinois.

Centennial Park can be found in West Champaign near Centennial High School. Centennial Park currently contains 134 acres (542,000 m²) of land, making it the largest park in the system. However this land is disjoint, with Centennial High School occupying the land between the original park and its 61 acre (247,000 m²) extension. The original park was founded in 1959 for $161,809 and contains a large public swimming pool with waterslides, picnic pavilions, two baseball fields, the Children's Prairie Farm, and an extensive network of trails through the wooded parkland. An extension to the park was made to include two public tennis courts and a volleyball court just north of the park and adjacent to Centennial High School. Later more land was added to the system north of Centennial High School which includes an additional baseball field, a softball field, and several administrative buildings for the Park District. 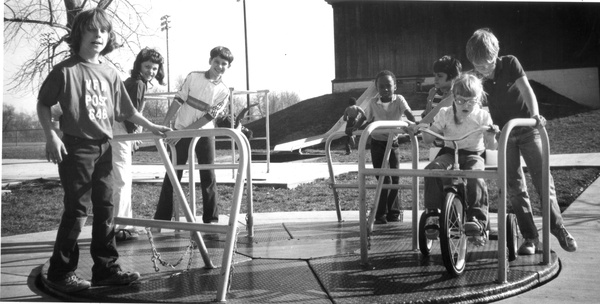 Champaign's parks have been a main part of the city's fabric nearly as long as the city has been in existence, with land for Champaign's first park made available in 1854. This property was originally laid out as a public square and possibly as the site for the county court house. However in 1859 the 12.7 acre property became the first park in Champaign County and was named White Park in honor of the man who made the land available. Known as the "Commons", the two square block space was put to work by settlers as a cow pasture in 1861 when the city council adopted a motion to permit calves to be turned into the City Park at $.35 per month.

In the late 1800s an Illinois Central Railroad executive named Benjamin F. Johnson, in his will designated $10,000 to the city for construction of a fountain and bandstand in White Park. The fountain was constructed with a bronze statue on top which was created by renowned sculptor Edward Kemeys. The Prayer for Rain statue and the Johnson Fountain were dedicated in 1899. The bandstand was also added to the park in the late 1800's and it was from there where concerts and other events were held. One of the most notable events was a speech given in 1912 by Presidential candidate Theodore Roosevelt. The fountain, sculpture and bandstand were the beginning of a now much celebrated sculpture and monument program within the Champaign Park District.

The Champaign Park District (CPD) actually first organized as a Township Park District in 1911. It had limited taxing power and depended on donations ofland to establish the park system. The majority of Champaign's current parks were acquired through donations and in the mid 1920's parks that were owned by the City of Champaign were transferred to the Park District. Since then all public parks have been held by the District. The first tax levy was made in 1912 and collected in 1913. Of note, the Wabash and Big Four Railroads interposed tax objections at the June term in 1913. In 1951 a new community center was opened and would serve as the launching pad for Champaign's first structured recreational programs. Located on North Market Street, the bUilding was the former site for the Church of the Brethren. Activities in those first years included adult square dancing, social clubs, drama club for grade school aged children and neighborhood night programs. The building was purchased through a public subscription drive and much of the rehabilitation was completed by volunteers. By the middle 1950's it became evident that due to the exploding growth of the community and the limited taxing powers of the Township Park District, the current structure was inadequate to meet the needs of residents in the community. Therefore in 1957 The District was reorganized as a General Park District by a referendum of voters. The CPD has since been a local unit of government with its own legal and financial responsibilities and is governed by 5, local residents who are elected into office for 6-year terms In 1966, the Champaign City Council transferred the functions ofits Playground and Recreation Board and the special tax related thereto to the CPD. Since that time, the those functions have been vastly improved and expanded upon. One of the first projects for the new board was the acquisition of nearly 80 acres ofland that would later become Centennial Park. This park was planned cooperatively with the Champaign School District which owned 40 acres of property adjacent to the land. The result would become a unique integration offacilities on both properties. In 1985 the Champaign and Urbana Park District joined forces to create what is now known as the Champaign-Urbana Special Recreation Program. The resolution that passed provided the district the authority to "levy and collect a tax of not to exceed .02% of the value, as equalized or assessed by the Department of Revenue of all taxable property in said Park District for the purpose of funding the District's share of the expenses of jointly providing, with the Urbana Park District, recreational programs for the handicapped under Section 8-1 Ob of the Park District Code of the State of Illinois. The program currently serves nearly 400 special needs residents every year, providing them with quality recreational opportunities with the assistance of specially trained staff The Champaign Park District also maintains pieces of history in some of the facilities it owns. The Springer Cultural Center, located in the heart of downtown Champaign, was originally constructed as a post office in 1904 and was later
listed on the National Register of Historic Places in 1975. The architectural design represents the Renaissance Revival style with its aesthetics emphasizing simplicity and order. Springer is currently the main location for cultural arts programs within the District and houses cultural, recreational, and educational programs for all ages as well as workshops,lectures, exhibits, and performances. Another historical facility located in downtown Champaign and owned by the Champaign Park District is the Virginia Theatre which has been part of this community's history and quality oflife since 1921. Built in the tradition of great vaudeville-movie palaces of the 1920's and early 30's and now on the National Register of Historic Places, the Virginia is a beautiful theatre with a rich link to our past.

In addition to hosting great performances, and live music, the Virginia Theatre still offers movies on a regular basis, proViding community members an opportunity to watch new releases or classic favorites on
the big screen in this historic facility. The theatre is also home to many performing arts groups including Champaign Urbana Theatre Company and Champaign-Urbana's Dance Arts Program as well as EbertFest, the annual festival hosted by local favorite, Roger Ebert, recognizing his picks for films he thinks have been overlooked by the film industry. 1his event brings thousands of people to the community from all over the world. Now nearing its own 100 year anniversary, the Champaign Park District currently holds 60 parks totaling over 600 acres and serves area residents with over 1200 programs and special events each year. With speCialty facilities like the historic Virginia Theatre, the Sholem Aquatic Center, Prairie Farms and the Tennis Center, the Champaign Park District has something for everyone.

This organization participated in a UIUC study on community technology use. For more on that see Study of UC2B Anchor Institutions' Technology Use