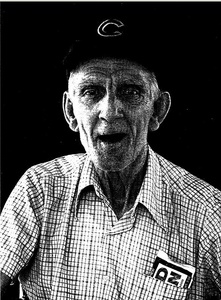 Born in 1909 in Urbana, Clarence McGraw was a lifelong resident of the community. A taxicab driver for 33 years, he said in 1984, "I retired about nine years ago. I drove right up until then. Once you catch on to cab drivin' you can make a livin'. But you got to hustle - can't sit in a coffee shop. "I had a lot of bad luck. Had a bad leg since I was four years old. Drove a cab because I couldn't do anything else." However, he has also "worked on a farm, scooped coal, driven a garbage truck. I did it all! "I was in the Depression in '32;' he says. "I tell you that was rough." In the 1930s and 1940s, he also says, "I was a pitcher for ten years in the
Twilight League, Commercial League - all of them. Would you believe it with a bum leg." Regarding his other interests he says, "I don't drink. I don't smoke. I chew a little bit." He is most proud of his family. "My children all have babies. They all have girls, with another one on the way. Grandma and Grandpa watch them on Saturday night when the children want to go out." Although he still enjoys baseball he is now concerned with "my condition. My jumping hand - they call it tremors." He is also not very fond of "those hard x-ray tables. You see, I'm bony. "I can't dress myself now;' he says. "I can't untie my shoes. I can't even take off my britches. I'm not a baby, but there are some things I just can't do for myself."