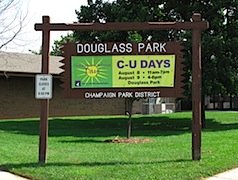 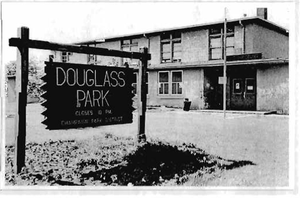 Located at 512 E. Grove St. in Champaign, for nearly eight decades, the Douglass Park area (which includes the park, center, library and annex) has been indispensable to residents in Champaign's North End. Residents have participated in various artistic and recreational activities which include, but are certainly not limited to, African and modern dance, football, vocal and instrument lessons, karate, basketball, roller skating, reading activities, computer skills, and various other games. Additionally, the lives and hard work of school children and adults alike have been celebrated in this space. In the meeting rooms, during activities, and during the annual Champaign Urbana Days reunion, people recall feeling connected to the area and speak of this area with great pride.

Blacks in Champaign County not only suffered economic restriction, but experienced social segregation as well. In response to having separate and inadequate communal facilities for Champaign-Urbana Blacks, the Douglass Community Center was founded in the early 1930s. The center, named for the scholar and activist Frederick Douglass, was rebuilt in 1945.

This recreation space was hard won and those supplying activities in the space have had to be constantly vigilant to ensure that resources and activities remain present. Community groups have (and still do) debate tirelessly with the Park District, other city agencies, and the university over the growth, development, and use of the park area. During the sixties and seventies, coalitions between University of Illinois programs and the center provided students free visual arts and music classes, a day camp program, and funds for the purchase of skates. These connections were often short, for a summer or semester. In the late sixties, many serving In leadership positions wanted what current university professionals are still arguing for: a long term collaboration between current U of I professors, staff, students, and residents. Long term collaborations may alleviate needs such as space, understaffing, different activities, and monetary resources. In addition to collaboration with university affiliated individuals, as early as 1973 there has been a call for coalitions between other agencies serving north end residents such as the Urban League and local ministers. Quoting former center leader Nate Dixon "If all of us in the community knows exactly what the other is doing, I think we can reach a lot more people."

In their f11m, And the Beat Goes On: the Spirit and the Legacy of the Douglass Center Drum Corps (2006), authors Nick Green, Brian Mitchell, Jay Walker, as well as Coreyawn Donald, Kwan Cobbs and Mike Jones document the profound impact music had on creatlng a feeling of "community pride". There are also photos from the 1960s and early 1970s documenting the Douglass Center Drum Core. 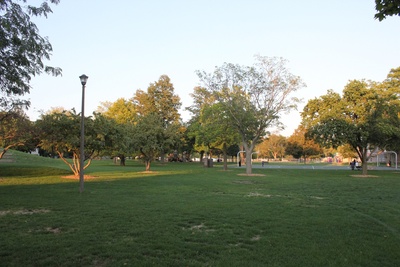 A Legacy of Community Art in and Around Douglas Park, SriPallavi Nadimpalli and Sandra E. Weissinger http://eblackcu.net/portal/items/show/30​

And the Beat Goes On: The Spirit in the Legacy of the Douglass Center Drum Corps (Illinois Youth Media 2006) http://eblackcu.net/portal/items/show/1919​