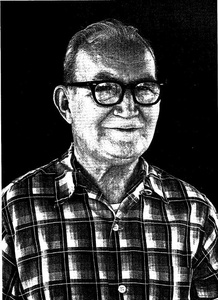 Originally from Winamac, Indiana, where he was born in 1912, Ernie Bair lived in Rantoul since 1948. He taught at Rantoul Township High School from 1958 to 1973. He's also been an insurance salesman and a management analyst at Chanute Air Force Base. Having raised two adopted children and having hosted eleven children from other countries, he is especially proud of "my family, the children we entertained,
and serving eight years on the Rantoul City School Board," he said in 1984. He was primarily interested in "the education of young people, particularly my five grandchildren." In his lifetime he saw "the growth of population, the advent of space technocracy, progress in transportation, improvements in communication, education, and entertainment. I think older persons should always be shown the respect they deserve. They
should make as many decisions as possible about their lives. Let us decide what's good for us. I'm now retired and cannot see well. However, I feel fortunate to be able to participate in club activities and play with my grandchildren, whenever possible."