Gerald (Candy) Foster has been performing classic rhythm and blues throughout the Midwest for 40 years. Born in Danville, and based in Champaign‐Urbana since the 1960s, Candy is well‐known as one of the hardest working blues singers in the area. An early influence was his mother, a locally prominent jazz singer. Candy got his big break when saxophonist Tony Zamora asked Candy to sing the blues for a nightly gig at the Rainbow on North First Street. Candy went on to have his own band, Soul Brothers, which gained regional fame in the Vietnam era. Since 1996 his band has been Shades of Blue. Over the years, Candy has appeared with such blues greats as Lonnie Brooks, Etta James, Big Daddy Kinsey, KoKo Taylor, Junior Wells, Gatemouth Brown, Little Milton, Eddie Shaw, Son Seals, Bobby Blue Bland, and Bobby Rush, Ray Charles, Stevie Wonder, Aretha Franklin, The Temptations, Natalie Cole, The Four Tops, The Marvelettes, Del Shannon, and Mitch Ryder and the Detroit Wheels. Candy says his main accomplishments have been keeping live entertainment alive in the Midwest and helping young people develop their craft.

Gerald was featured in Difference Makers 2010: An eBlack Champaign-Urbana Publication. 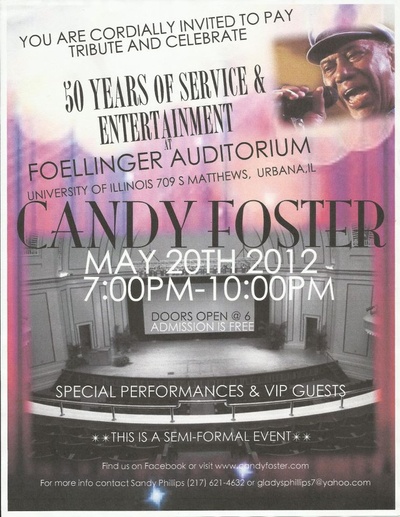 On Sunday May 20th 2012, a tribute to celebrate Candy Foster's 50 years of service and entertainment will be held at the U. of I. Foellinger Auditorium from 7:00 to 10:00pm. There will be numerous special appearances and VIP guests. Check out Candy's Facebook page for more info; http://www.facebook.com/pages/Candy-Foster-and-Shades-of-Blue/298865296410