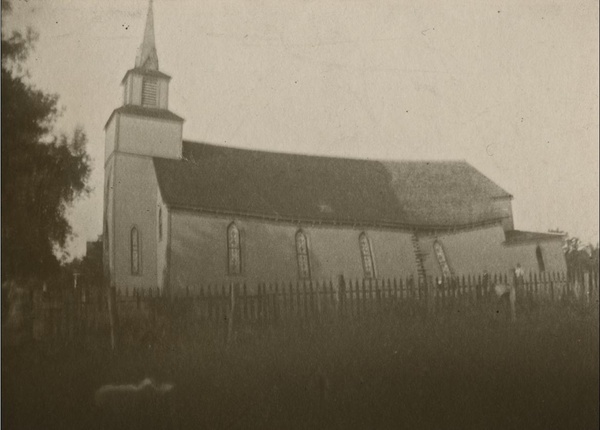 When the new train depot was built 2 miles west of the village, the Congregationalists and others followed to "the depot neighborhood" which was to become downtown Champaign. The Illinois Central Railwahy drained and filled in a pond used by geese, then donated the land to the church. The structure built in 1855 was affectionately called the Goose Pond Church. The site was on the northwest corner of First Street and University Avenue, where the Champaign Police Department now stands.

Goose Pond Church is shown in the upper left of a painting by Lisle Wiseman-Casper entitle West Urbana IL - 1858. Continuing clockwise from the church are the Doane House, Cattle Bank and West Urbana's first schoolhouse.

Rough planks formed the pews and a large dry goods box served as the pulpit in the $1,000 structure. Nevertheless, area Baptists and Methodists without buildings were eager to use the building. The church also became a center for literary clubs, the temperance society, school meetings and political conventions. Church records show that Abraham Lincoln, an attorney made his speech in support of the first Republican candidate for U.S. President, John C., Fremont, at the Goose Pond Church on June 17, 1856. "While Lincoln was coming into notice as a circuit lawyer and an Illinois politician .. he ofen spoke in the Goose Pond Church," according to "A standard History of Champaign County, Illinois" by J. R. Stewart.

After the Civil War, the Goose Pond building felt too small. The congregation sold the structure in 1866. It was moved to a different location and becamse St. John's German Catholic Church. The congregationalists built a new church on Park street, west of Neil Street. In september 1866, when it was dedicated, it was the largest church in the city. By 1867, the church had 138 members. In the 1870s, some members decided church rules were too rigid, but the views never carried the required two-thirds vote of the membership until 1888. The Rev. William Gifford Pierce, who was pastor of the church from 1872 to 1887 before the change in the rules, "gave his church a definite trend in the direction of a more liberal faith and policy," according to a 75-year church history compiled in 1928.

But Pierce also had to deal with an 1873 fire that destroyed the Park street sanctuary. The rebuilding took place in the southeast corner of State and Church streets, where Robeson Hall now stands. The site remained the church home for 44 years. When the congregation sought to extend its faith into north Champaign in 1903, it started a Sunday school known as the Sunshine school, which grew into an organization known as the Plymouth Branch. The branch at Fifth and Grove streets was another Congregational church for 12 years, but then became independent from the denomination.

Source: Community UCC marking 150 years of service to the community